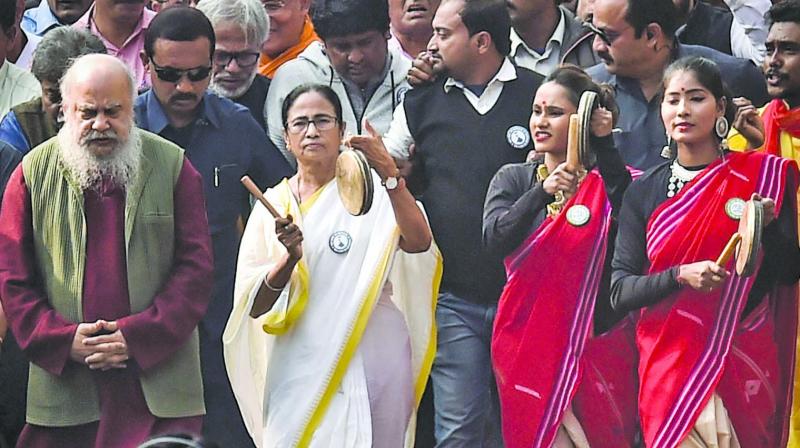 TMC chief and West Bengal CM Mamata Banerjee plays a musical instrument while leading a protest rally against the CAA and NRC in Kolkata on Tuesday. (Photo: PTI)

Kolkata: Upping her ante against the BJP a day after its ouster from power in Jharkhand, Trinamul Congress supremo Mamata Banerjee has advised Prime Minister Narendra Modi and Union home minister Amit Shah to “shun arrogance and audacity” after getting “befitting replies” from the people for their dissent over the Citizenship Amendment Act (CAA) and National Register of Citizens (NRC).

In a blistering attack on Mr Modi and Mr Shah over what she reiterated as their contradictory statements on the implementation of the CAA and NRC, the West Bengal chief minister also asked them to find out who actually spoke the truth after leading a protest march against the CAA and NRC in north Kolkata on Tuesday.

“The Union home minister says in Parliament that the National Register of Citizens and CAA would be enforced across the country. But the PM claims: We have not said this. We say, each and every word we stated is in public domain from the Parliament to the streets. Whatever you have stated is in the public domain also. Please find out who said what,” Ms Banerjee told the Prime Minister and BJP president.

She added, “People have started giving befitting replies. You have got a befitting reply in Maharashtra. You got in Jharkhand yesterday also. At Jharkhand, the BJP has been jolted severely (Jhar Khondo BJP Hoyechhe Londo Bhondo). Such a jolt came back to back. If the chandelier of democracy is lit up, all other lights become dim. Only the chandelier will be seen.”

She cautioned them, ‘BJP babus, be careful. Do not use strength always. People do not need to be careful because they are fighting a battle peacefully. Shun arrogance and audacity.”

Mocking the Prime Minister yet again over his comment on identifying who was behind the protests by their “dress”, the Trinamul chief asked, “What has happened suddenly that dress has become a yardstick for identity? Can’t language and face be enough to identify someone?”

Referring to the BJP by criminal sections of the Indian Penal Code, she added, “There is no one else as dangerous and sections 420 and 144 like them.” Countering BJP working president J.P. Nadda’s complaint that there was no law and order in West Bengal, the chief minister wondered about the existence of the rule of law in Uttar Pradesh and other BJP-ruled states where, she claimed, violent protesters were gunned down by the police.

She argued that while the BJP leaders were allowed to hold rallies in the state, a Trinamul delegation was, however, stopped from visiting violence-hit Uttar Pradesh recently. “Yesterday,

BJP leaders came and toured the city in cars. No one stopped them. Where does the rule of law exist then?” Ms Banerjee asked.