India   Politics  26 Feb 2017  UP: Dimple gets back at BJP with new KASAB acronym
India, Politics

UP: Dimple gets back at BJP with new KASAB acronym

She said that the people have been too busy listening to Modi’s 'Mann ki Baat' to realise how prices of LPG cylinders have gone up. 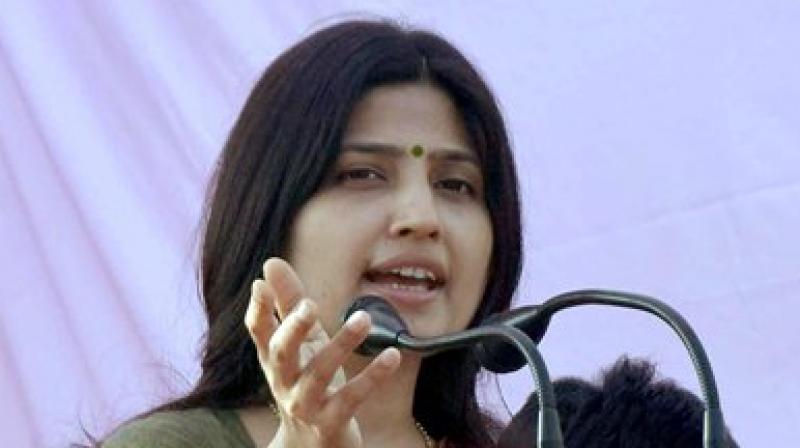 Jaunpur: In the latest addition to the growing list of acronyms in the ongoing Uttar Pradesh assembly elections, SP MP from Kannauj, Dimple Yadav on Sunday redefined 'Kasab' - the abbreviation coined by BJP chief Amit Shah.

"BJP says 'Ka' stands for Congress. Your Akhilesh bhaiyya says 'Ka' (in Hindi) stands for Computer, 'Sa' stands for smartphone, through which you can get all the information about the policies of the government and 'B' stands for 'bachche' (children)," Dimple, wife of Chief Minister Akhilesh Yadav said at an election rally here amid loud applause.

The ruling Samajwadi Party has a scheme to distribute laptops to meritorious students and promised to give smartphones if it returns to power in the state.

Shah at a rally last week at Chauri Chaura in Gorakhpur had used the 'KASAB' acronym to describe 'Ka' for Congress, 'Sa' for SP and 'B' for BSP.

Shah coined the acronym matching the name of terrorist Ajmal Kasab - one of the perpetrators of 26/11 Mumbai attack.

Akhilesh had earlier hit out at the BJP chief for his "Kasab" barb, saying "Ka" actually stood for "kabutar" (pigeon), while BSP supremo Mayawati had said, "There cannot be a bigger Kasab than him" and dubbed Shah a "terrorist".

Dimple said SP would give 35 percent reservation to women, and pregnant women would get foodgrains delivered at their doorstep.

"If SP is voted to power, we will do away with the age-limit for women in Class-III and IV government jobs," she said.

The Kannauj MP also said that for every gas stove purchased, her party would give a pressure cooker.

Taking a dig at Prime Minister Narendra Modi, she said, "The people of the country, while listening to PM's 'Mann ki Baat' have not realised how the prices of LPG cylinders have gone up".