India   Politics  26 Apr 2019  If I do anything wrong, I-T raids must be conducted at my home: Modi
India, Politics

If I do anything wrong, I-T raids must be conducted at my home: Modi

Addressing a poll rally, Modi said that in the Congress culture, corruption was the 'only protocol'. 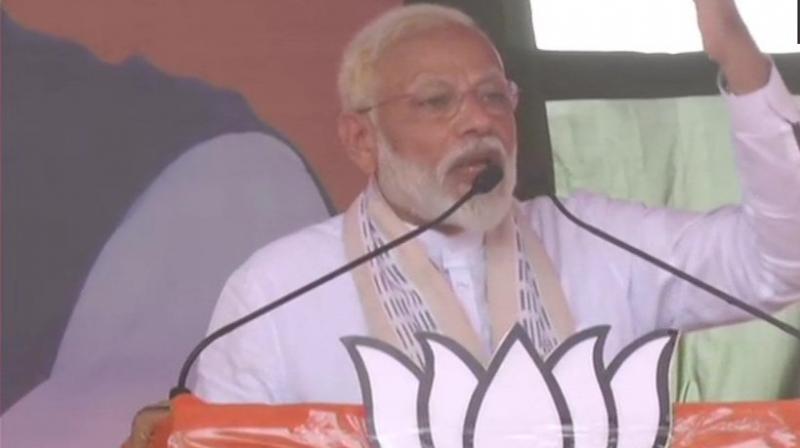 Sidhi: Targeting the Congress on corruption, Prime Minister Narendra Modi on Friday said the party committed the "Tughlaq road election scam", whose money was being used for the poll campaign of its chief Rahul Gandhi.

Addressing a poll rally here, Modi said that in the Congress culture, corruption was the "only protocol".

The Prime Minister also stressed that the law was equal for all and that even his residence should be raided by the Income Tax department if he was involved in any wrongdoing.

"The food meant for children and pregnant women under a government scheme was snatched from them...the money was siphoned off to Tughlaq Road residence of a Congress leader in Delhi," Modi said.

"That money is being used for the poll campaign," he said, attacking Gandhi. The Income Tax Department recently conducted raids on close aides of Madhya Pradesh Chief Minister and Congress leader Kamal Nath.

The Central Board of Direct Taxes had said the department has also detected a trail of Rs 20 crore suspect cash allegedly being moved to the "headquarters of a major political party in Delhi" from the house of an important person who lives on Tughlaq Road, home to many VIPs.

Modi also said money disbursed by the Central government for farmers in Madhya Pradesh under its schemes was yet to reach the beneficiaries. He accused the Kamal Nath dispensation in the state of not sharing with the Centre the list of farmers requiring the help.

Taking a jibe at the MP chief minister, Modi said perhaps Kamal Nath was "too busy" to share the list with the Centre due to his Switzerland visit and political grooming of his son.

He also took potshots at "those from the opposition parties aspiring to become the next prime minister".

They have already ordered their tailors for new attires, he added. Modi asked the people who from among the opposition wanting to become the PM can wipe out terrorism.

When they replied chanting his name, he said it not him but their "one vote" that would combat terrorism.