India   Politics  26 May 2022  Congress gets a jolt as Kapil Sibal quits
India, Politics 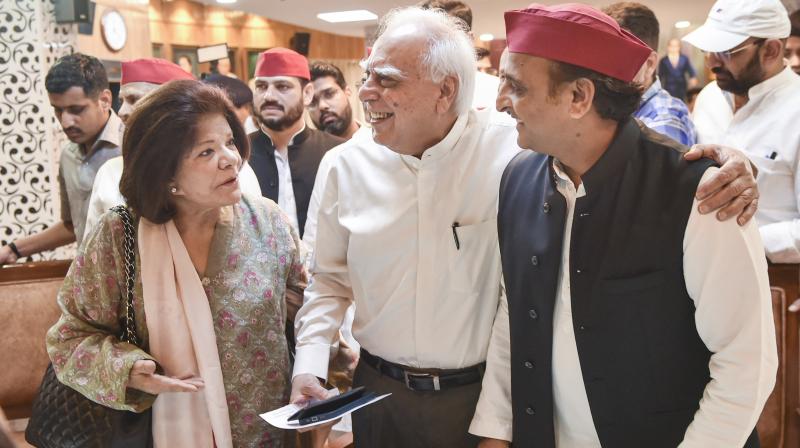 New Delhi: In a major setback to the Congress, senior leader Kapil Sibal has quit the party and filed his nomination as an Independent candidate from Uttar Pradesh in the coming Rajya Sabha elections. He is supported by the Samajwadi Party, which is expected to get three Rajya Sabha seats from Uttar Pradesh. Mr Sibal arrived in Lucknow Wednesday morning and before filing his nomination papers as an Independent candidate met senior Samajwadi Party leaders, including party president Akhilesh Yadav. Mr Yadav and other SP leaders were present when Mr Sibal filed his nomination papers.

Speaking to the media after filing his nomination, Mr Sibal said: “I have filed my nomination as an Independent candidate. I have always wanted to be an independent voice in the country. We (the Opposition) want to create an alliance so we can oppose the (Narendra) Modi government.”

Mr Sibal then added: “I was a Congress leader. But not anymore. I had resigned from the Congress on May 16. I will not say anything about the Congress… It is not appropriate for me to say anything. It’s not easy to leave a relationship of 30-31 years.”

After Mr Sibal filed his nomination, Mr Akhilesh Yadav said: “Kapil Sibal is a senior lawyer. He has presented his opinions well in Parliament. We hope he will present the opinions of both the SP as well as himself.”

Insiders claim that the Congress high command was in touch with Mr Sibal after his resignation on May 16, and trying to ensure that the matter could be resolved. Mr Sibal had met Congress president Sonia Gandhi and apprised her of his predicament, and reluctance to continue within the party. AICC general secretary Priyanka Gandhi Vadra also met Mr Sibal, and sources said it was a “gracious and frank” meeting about the future of the Congress. But after several overtures, Mr Sibal had made up his mind and the parting was pleasant.

Mr Sibal was one of the key voices in the G-23 change seekers’ group. He was the first one to categorically state that the Gandhis should hand over the leadership and come in a mentoring role for the party. Earlier, his home had been gheraoed by Congress workers over some utterances on the functioning of the Congress. In a press conference, Mr Sibal had said that their group was G-23 and “Ji Huzoor 23”, that irked some Congress leaders.

Recently, most of the other G-23 members, including Ghulam Nabi Azad, Anand Sharma, Shashi Tharoor, and Bhupinder Singh Hooda, have been accommodated by the party in various capacities. This is the fifth high-profile exit from the Congress this year. The list includes former Union ministers Ashwani Kumar and R.P.N. Singh, and Sunil Jakhar from Punjab and Hardik Patel from Gujarat. Even after the party held a “chintan shivir” in Udaipur recently, the series of departures are continuing. While the Congress seems to have mastered the art of not appearing bothered over such exits in the last couple of months, the list just keeps on growing.

There are two important Assembly elections due later this year -- in Gujarat and Himachal Pradesh. If the Congress cannot get its house in order, trouble will only mount for the party.