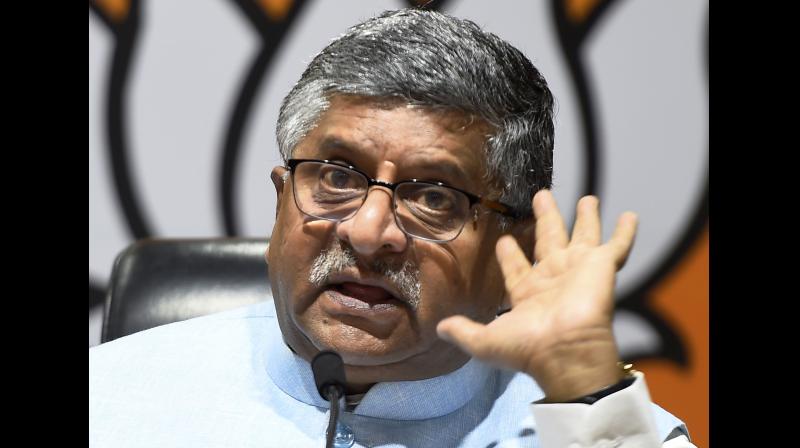 New Delhi: Twitter on Friday blocked information technology minister Ravi Shankar Prasad’s account for an hour for alleged violation of the US Copyright Act, a move the minister said was arbitrary and a gross violation of India’s IT rules. Hitting out a Twitter, Mr Prasad said in a couple of posts on Koo, another social media platform, that Twitter's action was a breach of the IT rules, as Twitter failed to give prior notice before denying access to his account. The account was subsequently unblocked after a warning.

Mr Prasad, who is alleged to have breached the copyright law by posting clips of himself from television debates, said: “Twitter denied access to my account for almost an hour on the alleged ground that there was a violation of the US Digital Millennium Copyright Act. Subsequently, they allowed me to access the account.”

The minister added: “It is apparent that my statements calling out the high-handedness and arbitrary actions of Twitter, particularly sharing the clips of my interviews to TV channels and its powerful impact, have clearly ruffled its feathers.” He said Twitter’s actions were “in gross violation of Rule 4 (8) of Information Technology (Intermediary Guidelines and Digital Media Ethics Code) Rules 2021, as they failed to provide any prior notice before denying me access to my own account.”

Twitter and the government have been at loggerheads over multiple instances in the past few months. The new rules for social networking websites, which include appointing India-based compliance executives and other conditions, have led to a protracted feud, raising concerns that Twitter may no longer enjoy protection against user-generated content.

“Further, it is now apparent why Twitter is refusing to comply with the Intermediary Guidelines because if Twitter does comply, it will be unable to arbitrarily deny access to an individual’s account which does not suit their agenda,” Mr Prasad wrote. As Twitter invoked the US Digital Millennium Copyright Act, Mr Prasad said: “The issue that further needs to be deliberated in this context is whether India shall be guided by the copyright laws of the USA or its own copyright laws? Can a multinational platform like Twitter which proclaims itself as the flag bearer of free speech invoke American laws in India to curtain free speech of a senior minister of the Government of India?” He added: “No matter what any platform does, they will have to abide by the new IT rules fully, and there shall be no compromise on that.”

Meanwhile, Congress MP Shashi Tharoor, responding to Mr Prasad’s tweet, said a video posted by him was deleted by Twitter later owing to a copyrighted BoneyM song Rasputin in it. Mr Tharoor is chairman of the Parliamentary Standing Committee on Information Technology