Azam Khan said he was ready to resign immediately if it was proved that he used any unparliamentary words. 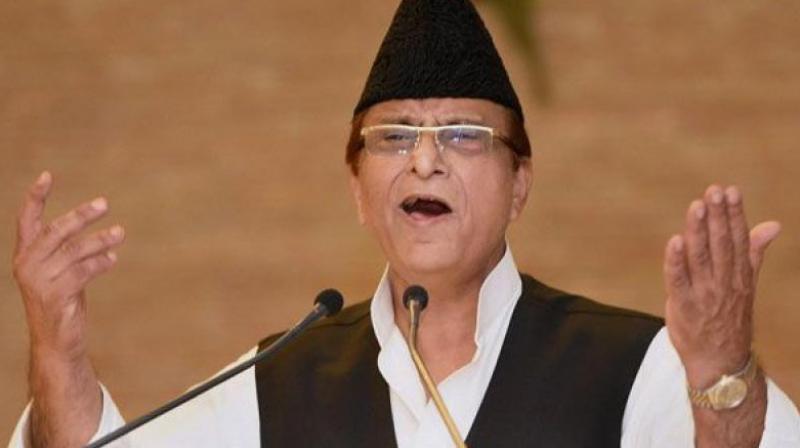 New Delhi: Known for his controversial remarks, Samajwadi Party member Azam Khan was once again in the eye of storm for his alleged sexist remarks against BJP’s Rama Devi, who was presiding over the proceedings in Lok Sabha on Thursday.

Lok Sabha witnessed high drama when Mr Khan, during the debate on the Triple Talaq Bill, while referring to the intervention of Union minister Mukhtar Abbas Naqvi, started with a couplet while looking at the treasury benches: “Tu na idhar-udhar ki baat kar ye bata ke kafila kyun luta,” (do not divert from the topic but say why the convoy was looted).

At this, Rama Devi, who was presiding over the proceedings, asked Mr Khan not to “look here and there” and address the Chair.

To this, the SP member allegedly made a sexist comment triggering strong protest from the treasury benches and Union ministers Ravi Shankar Prasad and Arjun Ram Meghwal seeking an apology from the veteran SP leader.

However, a defiant Mr Khan said that he had meant no disrespect to her as Rama Devi was like his “dear younger sister”.

Rama Devi later directed that Mr Khan’s remark be removed from the records even as the protests and war of words continued for a while disrupting the discussion on the Bill.

Speaker Om Brila rushed to the House and took over from Rama Devi.

He asked all members to respect the chair and be courteous to each other. He even made a remark on the conduct of BJP members.

Even as he was trying to pacify the agitated members, SP chief Akhilesh Yadav got up to defend Mr Khan when a stray comment agitated him and he lost cool.

The Speaker took objection to the remark reminding Mr Yadav that he had been a chief minister and he should be mindful of words which were unparliamentary.  He even asked the Mr Yadav to apologise.

Mr Khan said he has spent a long time in politics and he is ready to resign immediately if it is proved he used any unparliamentary words and walked out of the house with Mr Yadav and other SP members.

Adhir Ranjan Chowdhury, Leader of the Congress in the Lok Sabha, said it is not good if if members of the minority community leave the House.