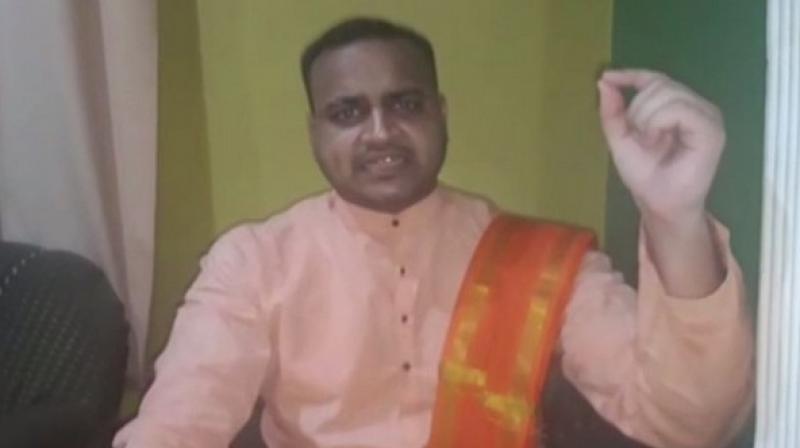 'I want to request the government of India that his head should be chopped off and left hanging from the door of Parliament,' Aftab Advani. (Photo: ANI)

"Azam Khan's comment on woman MP Rama Devi is condemnable. We strongly condemn it and want to request the government of India that his head should be chopped off and left hanging from the door of Parliament..so that people like Azam Khan such as Asaduddin Owaisi who are there should know that what happens to those who insult women," he said in the video.

"Insult to women should not be tolerated now. First, it was Jaya Prada, and now he has made lewd comments on the MP. This is condemnable. (bahut behuda bayan hai) I have earlier said this too that this old man has gone mad (ye budhha pagal ho chuka hai). It is necessary to kill him like a mad dog. He has become harmful to our country," Aftab said.

Samajwadi Party leader Mohammad Azam Khan on Thursday stoked controversy in the Lok Sabha with his objectionable remarks against BJP member Rama Devi, who was presiding over the House as BJP members sought an apology from him.

Azam Khan did not apologise and said he will resign if he had said anything unparliamentary. He also staged a walkout along with his party chief Akhilesh Yadav, who defended his remarks.

The uproar began soon after Azam Khan started his speech on the triple talaq bill and sought to take a dig at remarks made by Union Minister Mukhtar Abbas Naqvi.

Rama Devi asked him to speak looking at the Chair and address the House through the presiding officer.

Azam Khan made remarks that were perceived to be sexist by the treasury benches and they strongly objected, Khan said she was very respected and was like a sister to her.