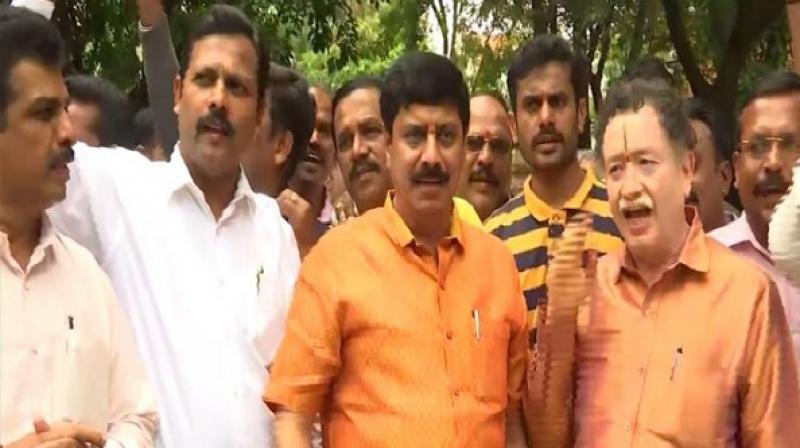 Last week, BJP lawmaker from Karnataka, Shobha Karandlaje had climbed 1,008 steps at Chamundi hills to offer prayers for Yeddyurappa to become the next chief minister of Karnataka. (Photo: ANI)

Bengaluru: Shortly after BJP state chief BS Yeddyurappa announced that he is going to take oath as the 25th Chief Minister of Karnataka, party workers reached his residence to celebrate the saffron party's come back to power in the state.

"People of Karnataka are very happy today. Yeddyurappa is a fighter and is now going to take the oath for the fourth time. 14 months before, the unholy alliance of Congress-JD(S) made the development very poor. They have looted the state and no development has taken place. We are sure that Yeddyurappa will give a good government," BJP leader Narayanaswamy told ANI.

BJP workers raised slogans in support of the party and its state chief.

Yeddyurappa met Governor Vajubhai Vala to claim to form the government in the state three days after the 14-month old Congress-JD (S) coalition government fell after losing the trust vote.

"Today BS Yeddyurappa ji has staked claim to form the government, the party high command has supported him. Numbers in the Assembly are not a problem. The rebel MLAs are firm on their stand and if they want to join BJP, we will welcome them," BJP lawmaker from Karnataka, Shobha Karandlaje said.

Last week, Karandlaje had climbed 1,008 steps at Chamundi hills to offer prayers for Yeddyurappa to become the next chief minister of Karnataka.

Draped in a traditional pink saree, the Bharatiya Janata Party MP from Udupi-Chickmaglur, along with BJP workers, climbed the ancient stone stairway barefoot to reach the 3,300 feet high summit of Chamundi hills which houses the centuries-old Chamundeshwari temple.

After several resignations of MLAs from the ruling coalition resigned, the confidence motion moved by HD Kumaraswamy got 99 votes as against 105 of the opposition, leading to its defeat ending the 12-day high-voltage political drama. During voting, about 20 MLAs of the ruling coalition were absent from voting defying their party whips.

On Thursday, Speaker KR Ramesh Kumar disqualified three rebel Congress MLAs under the defection law for anti-party activities. Those disqualified were R Shankar, Ramesh Jharkiholi and Mahesh Kumathalli. Kumar said that he needs more time to take a decision on the disqualification of other MLAs against whom complaints were filed.

With the disqualification of three MLAs, the strength of the house is reduced to 221 and the halfway mark is 112.

In his letter to the Governor, Yeddyurappa stated that the strength of the BJP MLA is 105.