Party workers demanded that the governor convene a session of the Assembly. In Jaipur, a demonstration was held at the Youth Congress office 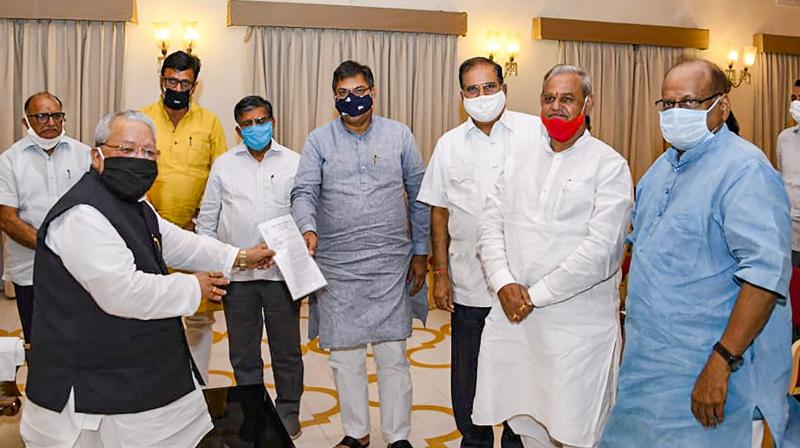 The Congress Party decided to make the Rajasthan crisis a fight to the finish and said on Saturday that it would hold protests in front of the Rashtrapati Bhavan in Delhi and all Raj Bhawans across the country from Monday and launch an online campaign to protest against the BJP’s “conspiracy” to topple its government in the state.
Rajasthan chief minister Ashok Gehlot said that the party might also approach President Ram Nath Kovind.

“We will sit on a dharna outside the Rashtrapati Bhavan,” Mr Gehlot said after a meeting of the state Cabinet, which had met to re-draft a proposal to governor Kalraj Mishra to call an emergency session of the state Assembly.

Mr Gehlot also indicated that the MLAs in his camp, currently at Jaipur’s Hotel Fairmont, might have to stay there for at least 21 days more.

In Delhi, a senior Congress leader told this newspaper that MPs, MLAs and all other office bearers have been told to launch an online campaign against the BJP from Sunday.

Congress workers staged demonstrations across Rajasthan, specially in Jaipur and other district headquarters, on Saturday after the Rajasthan governor refused to call an emergency Assembly session to let Mr Gehlot prove his majority on the floor of the House.

Party workers demanded that the governor convene a session of the Assembly. In Jaipur, a demonstration was held at the Youth Congress office.

“The BJP is conspiring to topple our government and the public is watching this. Efforts are also being made by invisible powers sitting in Delhi to influence the governor. People want the elected government to complete its tenure,” state Congress president Govind Singh Dotasara said, giving a call for holding the agitation.

The BJP on its part demanded the resignation of Mr Gehlot for protesting at the Raj Bhawan on Friday.

BJP leader Gulab Chand Kataria said: “We have demanded President’s Rule in the state. Chief minister Ashok Gehlot should resign for the kind of language he used Friday.”

Meanwhile, the Cabinet meeting discussed six points raised by governor Kalraj Mishra for calling an Assembly session, sources said. Congress chief spokesperson Randeep Singh Surjewala said the governor has given a note to Mr Gehlot seeking clarifications. “The governor informed that he will abide by the Constitution and will take a decision without being under any pressure,” Mr Surjewala said.