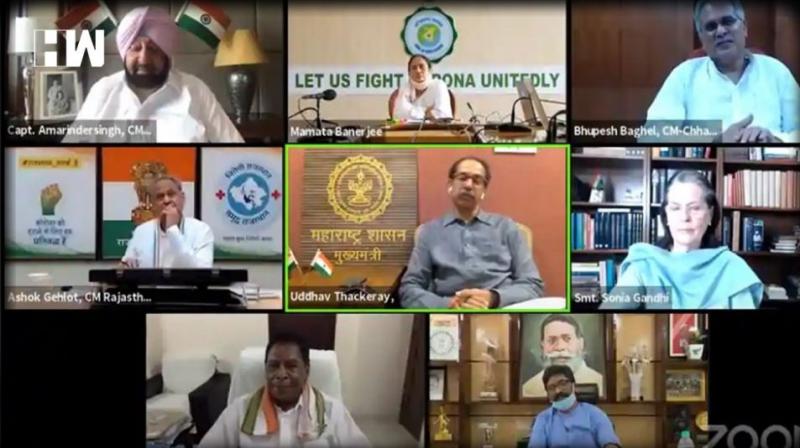 Chief Ministers belonging to various opposition parties got together and discussed the issue of GST compensation to states. (ANI Photo)

New Delhi: Chief Ministers belonging to various opposition parties on Wednesday got together and discussed the issue of GST compensation to states, with Congress President Sonia Gandhi saying the Centre's refusal to reimburse the states was nothing short of betrayal of the people by the Modi government.

In her introductory remarks, Sonia Gandhi said she agreed with Banerjee and Thackeray that all opposition-ruled states should together fight the Centre for their rights.

"We have to work together and fight together against the Central government," Gandhi said at the meeting while endorsing Banerjee and Thackeray.

"We should decide whether we have to fight or fear," Thackeray said at the meeting.

Gandhi termed the draft Environmental Impact Assessment (EIA) legislation as "anti-democratic" and alleged that the laws to protect the environment and public health are being weakened by the Modi government.

She said announcements like the National Education Policy should worry the opposition as they are a setback for secular and scientific values and reveal the "insensitivity" of the government.

On students' problems and the issue of exams arising out of the pandemic situation, she said it is being dealt with uncaringly by the Centre.

Banerjee urges all chief ministers to together move the Supreme Court for postponing the NEET and JEE exams as students are not prepared.

Jharkhand chief minister Hemant Soren said the ruling party was using agencies against the opposition and was undermining the federal structure.