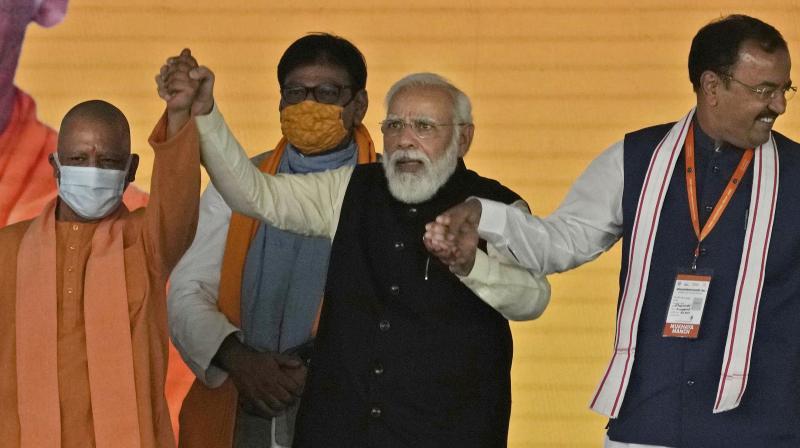 New Delhi: Prime Minister Narendra Modi on Thursday laid the foundation stone of India's "first net zero emissions airport" in Jewar in western Uttar Pradesh, the region which is one of the prime focus areas of the BJP’s election strategies and one that has been supporting the party since 2014.

Speaking during the ceremony, the PM highlighted the benefits of a “double-engine government” -- led by the BJP at the state and Centre -- and took a dig at the Opposition, saying some political parties in the country have always kept their self-interest paramount. In his address, Yogi Adityanath, chief minister of the poll-bound state, reminded people of the “regular riots” during previous regimes and asked voters to decide whether the country will “spread the sweetness of ganna (sugarcane) or the hatred of Jinnah (Pakistan founder).”

Insisting that Uttar Pradesh was “kept in deprivation and darkness earlier but is now getting what it always deserved,” PM Modi said the state is now making its mark internationally. The Noida International Airport, which would have one of the largest aerodromes in Asia, is slated to be completed by 2024.

Highlighting the development activities in the poll-bound state, Mr Modi said the new airport will help the state become an export centre whereby even MSMEs will have easier access to overseas markets and will become the logistics gateway for north India.

Asserting that infrastructure is "not politics for us but part of national policy," Mr Modi said, "We are making sure that the projects do not get stuck, do not keep hanging... We try to ensure that the infrastructure work is completed within the stipulated time."

Attacking the Opposition, the PM said, "The thinking of these people is self-interest, their own development and that of their family... Whereas, we follow the spirit of Nation First... Sabka Saath - Sabka Vikas, Sabka Vishwas - Sabka Prayas is our mantra."

"With the efforts of the double engine government, today Uttar Pradesh is turning into the most connected region of the country," Mr Modi said.

While citing the infrastructure initiatives taken by the BJP government in the state, Mr Adityanath said, “Jewar is known for its sweet sugarcane… but some people replaced it with regular riots... today there are two options in front of the country – whether to spread the sweetness of sugarcane or the hatred of Jinnah.”

The airport, the second international aerodrome in Delhi-National Capital Region, is expected to have an initial capacity to handle 1.2 crore passengers per annum. The airport, spread over 1,330 acres of land, will be developed by Zurich Airport International AG.

Civil aviation minister Jyotiraditya Scindia said it was under Mr Modi's direction that Asia's biggest airport is being built in the state. He said that the airport will bring investments worth Rs 34,000 crore.

For the first time, an airport has been conceptualised with an integrated multi-modal cargo hub, with a focus on reducing the total cost and time for logistics. The dedicated cargo terminal will have a capacity of 20 lakh metric tonnes, which will be expanded to 80 lakh metric tonnes, he said.

Among other aspects, the airport will be linked to the planned Delhi-Varanasi high speed rail, cutting down the journey between Delhi and airport to only 21 minutes, the release said.

There will also be a state-of-art MRO (maintenance, repair and overhauling) service. The airport will introduce a swing aircraft stand concept, providing flexibility for airlines to operate an aircraft for both domestic and international flights from the same contact stand, without having to re-position the aircraft.

In poll-bound Uttar Pradesh, various development projects have been inaugurated in recent months. On October 20, the PM inaugurated the Kushinagar international airport.

On Wednesday, civil aviation secretary Rajiv Bansal said five aerodromes are expected to be ready at Aligarh, Chitrakoot, Azamgarh, Mordabad and Shravasti in 2022. In 2023, two more are expected to come up at Ayodhya and Muirpur.