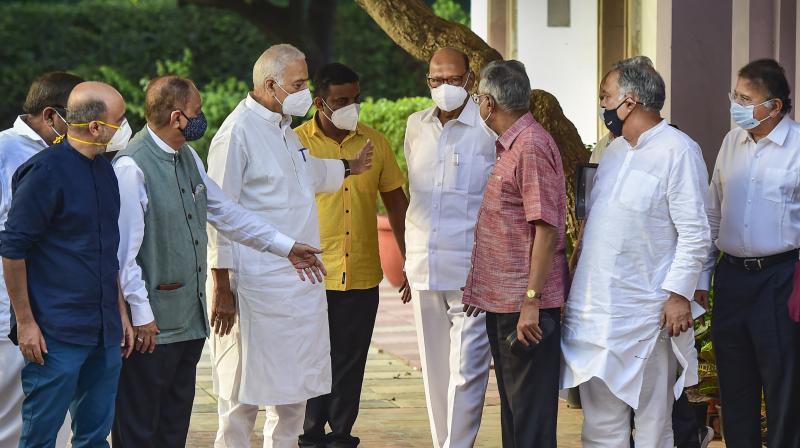 New Delhi: Days after the Rashta Manch met at the NCP supremo Sharad Pawar’s house in New Delhi in a bid to explore the possibilities for a third front sans Congress, the NCP and Shiv Sena, have made it clear that for any Opposition grouping to be a viable force against the BJP, the Congress will have to be a part of it.

Sources in the NCP said on Saturday that since the Congress is present in all states, it will have to be accommodated in the larger anti-BJP alliance. After returning to Maharashtra, Mr Pawar also said that if any such coalition emerges, its leadership will have to be "collective".

Speaking with reporters, Mr Raut said, “There is no need for the third front or any other front. Sharad Pawar has already made it clear. The Congress will play an important role in the alliance. It will be a strong alternative to the present dispensation… Work is in progress to bring all the Opposition parties together, which will not be complete till the Congress is roped in.”

Maharashtra strongman and NCP chief Sharad Pawar had called a meeting of several Opposition parties under the aegis of Rashtra Manch started by him and current TMC leader Yashwant Sinha. The meeting that drew a lot of media attention as the formation of a third front against the BJP juggernaut was eventually termed as a "non-political meet" by the NCP.

Several Congress leaders were also called to the Rashtra Manch meeting but they decided not to attend. One of the leaders, speaking on the condition of anonymity, said, “We have made our position clear even to the NCP. There can be no joint Opposition front without the Congress.”

He further added that if the Rashtra Manch wanted the Congress to attend, it should have spoken with Congress president Sonia Gandhi and she would have deputed Congress leaders to attend.

Congress insiders claim that the change in NCP and Shiv Sena's stand regarding the joint Opposition front has come after a stern message was conveyed to the NCP.