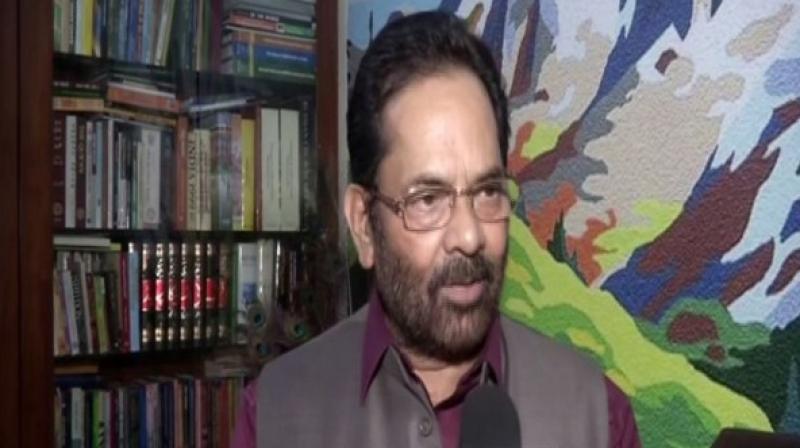 The Union Minister added that with the abrogation of special status to Jammu and Kashmir both Prime Minister Narendra Modi and Home Minister Amit Shah were eager to include Kashmir and the rest of the region in the mainstream of India's development process. (Photo: ANI)

New Delhi: Union Minister of Minority Affairs Mukhtar Abbas Naqvi on Tuesday said a team from his department is on a two-day visit to Srinagar where it will seek avenues for development and also assess the ground-reality in the region.

"Our department's team is visiting the Srinagar today and it will hold meetings with officials of the region and the Governor too. It will also hold dialogues with the people in this two-day visit and find out the problems plaguing the region in order to seek out and fill the gaps in the infrastructure in the region," Naqvi told ANI here.

Naqvi informed that a similar team will in the coming days visit Jammu, Leh and Kargil to assess the ground-realities and the scope of development on the ground.

The Union Minister added that with the abrogation of special status to Jammu and Kashmir both Prime Minister Narendra Modi and Home Minister Amit Shah were eager to include Kashmir and the rest of the region in the mainstream of India's development process.

"The PM Narendra Modi led government has "Development with Dignity" as its motto, in Jammu, Kashmir, Leh and Kargil people were not in the mainstream development process due to Article 370. This is a great opportunity for the Center to implement the development of the region and both Modiji and Shahji are committed to ensuring this takes place soon," he said.

Naqvi further attacked Congress' general secretary Priyanka Gandhi Vadra for criticising the Central government on the Kashmir issue, he said that the attitude of the Congress was disappointing and it was this attitude which had caused them to be shunned by the people of India.

"I am very disappointed with the Congress, I used to think they will join hands with the nationalist causes but they have aligned themselves with the voices across the border. Today the situation of Congress has become like a Benami property which has no takers in the country. That is why they are alone today in the political scene," he said.

Earlier on August 25, Priyanka had in a series of tweets attacked the Central government accusing them of "shutting down democratic rights in Kashmir".

"There is NOTHING more 'political' and 'anti-national' than the shutting down of all democratic rights that is taking place in Kashmir. It is the duty of every one of us to raise our voices against it, we will not stop doing so," she tweeted.