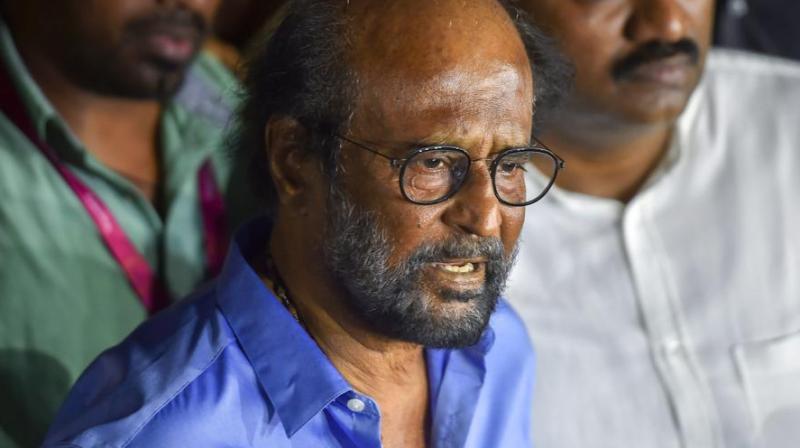 While Kamal Haasan has launched his political party and contested Lok Sabha polls, Rajinikanth is yet to take the step and launch his party. In December 2017, Rajinikanth said he will make his debut in the State Assembly elections scheduled for 2021 and contest in all the 234 constituencies. (Photo: PTI)

Chennai: Soon after actor-turned-politician Chiranjeevi in an interview to a Tamil magazine advised Kamal Haasan and Rajinikanth to stay away from politics, suspended Tamil Nadu Congress member and P Chidambaram's loyalist, Karate Thiagarajan claimed that the Tamil superstar will launch his political party in six months, reported News18.

“Rajinikanth is the only one who can fill in the political vacuum. He will launch his party in six months,” said Karate Thiagarajan.

Responding to Chiranjeevi’s interview, the leader said, “Chiranjeevi’s statement should be taken in context of a best friend’s opinion to the superstar."

In an interview to Ananda Vikatan, Chiranjeevi said: “Politics is all about money and even if someone wants to do something good for the people, he won’t be able to accomplish it.”

He recalled his political journey and said: “I was Number 1 and a Superstar when I decided to enter politics. I left films and I started my political journey. However, I lost in my own constituency only because the opponent spent crores of money to get votes. This was the same with Pawan Kalyan when he entered politics."

Based on his political experience, his only advice to both stars who have decided to enter politics is: "stay away from politics as it is not worth it".

“When Kamal Haasan decided to contest elections, I thought his party would win but it did not happen. For those who are very sensitive, politics is not their cup of tea. I hope both Kamal and Rajini are not like. My advice to both of them is to not enter politics. If both of you can handle failures and setbacks and want to do something good for the people, then enter politics. One day..maybe..things may change for you,” Chiranjeevi added, according to News18.

While Kamal Haasan has launched his political party and contested Lok Sabha polls, Rajinikanth is yet to take the step and launch his party. In December 2017, Rajinikanth said he will make his debut in the State Assembly elections scheduled for 2021 and contest in all the 234 constituencies.

Kamal Haasan, however, had met Prashant Kishore but there is no confirmation on whether the IPAC founder will work for Kamal Haasan’s Makkal Needhi Maiam for the 2021 Tamil Nadu elections.