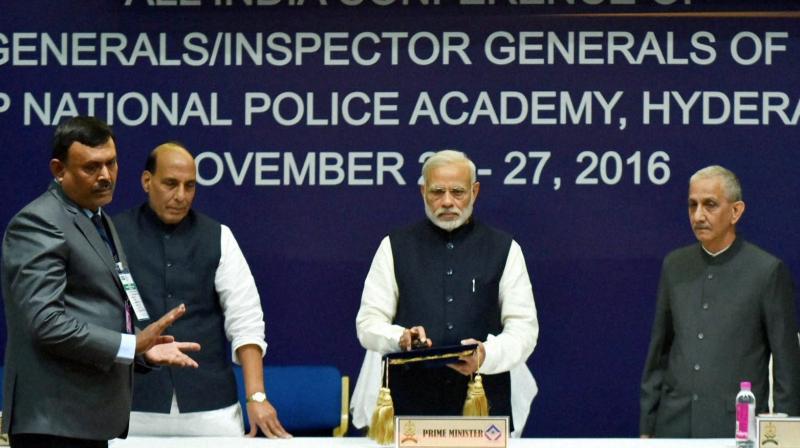 New Delhi: Prime Minister Narendra Modi’s Punjab visit on Friday may not just have signalled the countdown to the crucial Assembly elections in the state, due in a couple of months, but was also meant as a damage control exercise to contain the impact of demonetisation drive which has adversely impacted the state’s agrarian economy and in turn could hit poll prospects of the ruling Akali Dal-BJP combine. Thus, it was not without reason that PM Modi touched upon the river water row with Pakistan, which is a sensitive issue for Punjab, being a predominantly agricultural state.

While addressing a rally, after laying the foundation stone for an AIIMS campus at Bathinda, PM Modi reiterated his determination “to stop the flow of water into Pakistan and bring it for farmers of Punjab and Jammu and Kashmir.”

“The water, on which India has its right, is flowing into Pakistan. I am committed to stopping that water and bringing it for our farmers in Punjab, Jammu and Kashmir, and the rest of India,” Mr Modi said at the Bathinda rally.

Recently, the Supreme Court’s direction to Punjab to complete work on the Sutlej-Yamuna Link (SYL) Canal for releasing water to Haryana had led to a political furore in the poll bound state. It is believed that sensing how important an issue water was for the farmers of Punjab, and in a bid to limit the damage of the demonetisation move to the agricultural community, the PM made a strong pitch for allocating more water to the state.

“The governments slept in Delhi in the past. Our farmers kept crying and the water kept going to Pakistan. We will fight for the rights of our farmers. Because of the Indus Water Treaty, the waters of the Sutlej, Beas, and Ravi, over which our farmers have their right, are not available to them. I am moving ahead with conviction and have set up a task force on the Indus Water Treaty,” the PM added.

For the first time in its electoral history, Punjab is headed for a triangular contest with the new entrant, AAP, making a strong presence in the state. Further, the Akali-BJP coalition is facing a strong 10-year anti-incumbency and one its strongest critic, former BJP MP Navjot Singh Sidhu, is all set to align with the Congress. In fact, the former cricketer’s wife and MLA, Navjot Kaur, along with former hockey captain Pargat Singh, are all set to formally join the Congress on November 28.

It is believed that Mr Sidhu himself will contest from the Amritsar Lok Sabha seat subsequently. However, he would campaign for the Congress in the Assembly elections also.

On the other hand, AAP has managed to finalise an electoral arrangement with the Bains brothers who have a sizeable influence in the Doaba region. Both Simarjit Singh Bains and Balwinder Singh Bains are sitting independent MLAs and enjoy a clean image in the region.

According to Prof. Tanmesh Sharma, a former Reader in political science at the Doaba College in Jalandhar, the demonetisation move and new political arrangements could not have come at a worse time for the Akali-BJP government.

“The PM had to give out a strong statement on something that directly affects the farming community. Earlier, you had the SYL canal controversy which also affects farmers. And now this demonetisation will hit the rural and agrarian economy hard. So, both Congress and AAP are bound to make the maximum use of the two issues and put the entire blame on both the Centre and the state,” Mr Sharma added.

The former professor was also of the view that Mr Sidhu, himself a Jat Sikh, could make a dent into this community which has traditionally been an Akali vote bank in rural areas.

Avatar Singh Atwal, a former Khalsa College economics teacher, who specialises in agricultural and rural economics, also expressed similar views. Mr Atwal cautioned that farmers will be hit badly due to demonetisation. “Farmers are not able to dispose of their paddy crop which is lying in the mandis. So, if farmers do not have cash, it will have a cascading impact on harvesting the next crop of wheat and mustard in the months ahead.

The government should have realised that the agricultural sector is largely unorganised and totally dependent on the cash economy rather than the banking sector,” he added.

Mr Atwal feels the only saving grace for the Akalis is that the Centre agreed to the former’s demand to allow co-operative banks in rural areas to disburse cash to farmers.