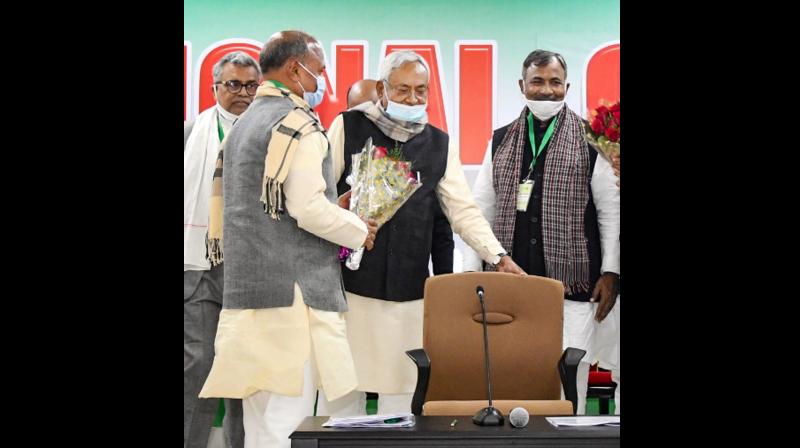 Nitish Kumar who was appointed as the JD(U)’s national president in April 2016, announced his decision to step down from the post on Sunday following the norms of “one leader one post” (PTI)

Patna: In a major political development on Sunday, Bihar Chief Minister Nitish Kumar resigned from the post of JD(U) national president and handed over the charge to one of his closest aide RCP Singh.

The decision was taken during the national executive meeting of the JD(U). Singh’s elevation was on expected lines since he was actively involved in most of the party’s policy decisions including advising Nitish Kumar during Bihar assembly elections.

His appointment for the party’s top post is also crucial from the perspective of upcoming assembly elections in West Bengal and Assam.

The development also comes at a time when the JD(U) is at the back foot after six of its seven legislators in Arunachal Pradesh quit the party and joined the BJP. The JD(U) has been terming it “ against the coalition dharma”.

Maintaining that the BJP is an ally only in Bihar, JD(U) leader KC Tyagi said that “strengthening party’s base in other states is on the top of the agenda” and also hinted that the JD(U) may contest assembly elections in West Bengal and Assam on its own.

“The JD(U) is deeply hurt by the political development in Arunachal Pradesh. Our party was supporting BJP but instead of inducting them into the state cabinet, they were taken into the party. This is not good for alliance politics and healthy democracy”, Senior JD(U) leader KC Tyagi said.

Tyagi however clarified that the Arunachal Pradesh incident will not affect their alliance with the BJP in Bihar and Nitish Kumar will continue as the Chief Minister.

Nitish Kumar who was appointed as the JD(U)’s national president in April 2016, announced his decision to step down from the post on Sunday following the norms of “one leader one post”, party leaders told this newspaper after the meeting.

RCP Singh's name for the post was proposed by Chief Minister Nitish Kumar during the JD(U) national executive meeting which was later approved by other members of the party.

RCP Singh is a former IAS officer turned politician, who has also served as the JD(U) general secretary and is considered close to Nitish Kumar. He hails from Nalanda which is also the home district of Bihar CM Nitish Kumar.

He has been party’s Rajya Sabha MP since 2010. Before joining politics he had also served as principal secretary to the Chief Minister Nitish Kumar in 2005.