Prakash Javadekar also called upon writers "to create a bridge" with the readers and promote reading habits. 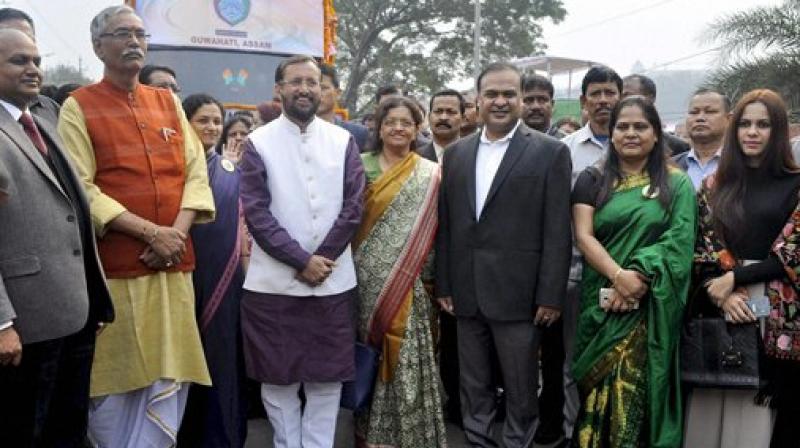 Guwahati: Union minister Prakash Javadekar on Saturday asserted that the NDA government was committed to upholding freedom of expression, thoughts and writings in all spheres of life.

"Freedom of expression, thought and writing is the very essence of democracy and we are committed to uphold it," he said at the inauguration of the three-day Brahmaputra Literary Festival in Guwahati.

The Union Human Resources Development Minister recalled the "dark days of Emergency against which we fought, went to jail and had it finally revoked" and said, "This government values freedom of speech, thoughts and writings as we believe that this will take the nation forward."

Javadekar described libraries as the "pride of a nation" and said they must be made "a part of our lives and set-up in every part of the country".

"India has, since ancient times, had a rich tradition of libraries in Nalanda, Taxila and Vikramshila and history has been witness to the fact that invaders have always attacked and vandalised libraries first," he added.

Javadekar said all kinds of reading - in print, through audio or e-books - must be encouraged at all costs as it has been seen that the development of these platforms has not adversely affected the publishing industry.

He also called upon writers "to create a bridge" with the readers and promote reading habits.

"Readers' participation is very important and the culture of reading is the essence of development of human beings," Javadekar said.

He hoped that literary festivals were viewed as "cultural investments" and held in all the states to celebrate the country's diversity and plurality.

On the occasion, Assam Chief Minister Sarbananda Sonowal said the world knew Assam for its two rivers - Brahmaputra and Barak - and hoped that the writers celebrated the culture, civilisation and strength of the Brahmaputra.