Notably, Jalalabad Assembly constituency will witness a high-profile contest, with 2 MP of rival parties contesting to take on Badals. 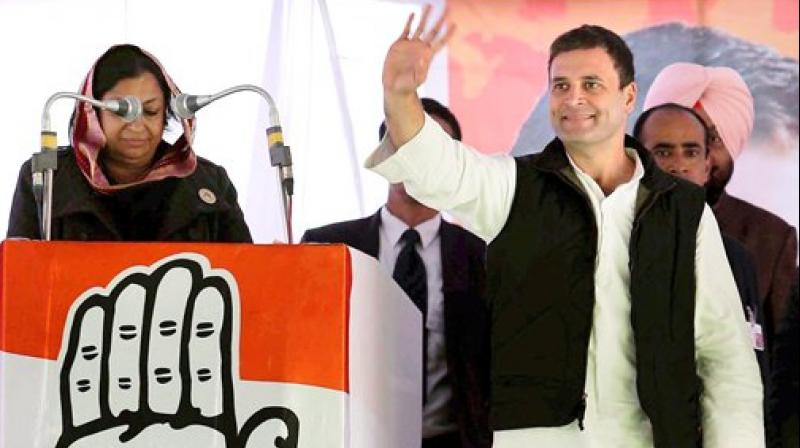 Jalalabad: Rahul Gandhi on Saturday stepped up his attack against the ruling Badals, calling Deputy CM Sukhbir Singh Badal a "symbol of corruption" and asking Prime Minister Narendra Modi to clear the air on why he was seeking votes for the "corrupt" if he was fighting against the menace.

Rahul, who began his election tour to poll-bound Punjab on Friday, addressed a poll rally in the pocket borough of Sukhbir Badal at Jalalabad on Friday, from where the SAD president is seeking re-election.

The Nehru-Gandhi scion attacked the Akalis for allegedly plundering Punjab and appealed people to vote for the Congress in the February 4 polls "to transform Punjab".

Attacking Modi in the same breath, Rahul said, "Modi comes here (to Punjab), delivers speech and says he is against corruption and has waged a war against it. Modi tells people here is Sukhbir Badal, you support him, vote for him and re-elect him."

"On one hand, Modi says he is fighting corruption and on the other hand he is trying to help India's most corrupt person. So, Mr Modi, tell us clearly if you are fighting against corruption, then why are you standing by Sukhbir Badal. Why are you helping him. Entire Punjab knows Sukhbir Badal is a symbol of corruption, but you say no no he is not a symbol of corruption. Now, whether people are right or whether you (Modi) are right, we will come to know in polls," he said.

Rahul said the ruling Badals had "plundered" the State for their own interests. "They have ruined the State by controlling everything here. The youth is unemployed while the industry is in shambles," he charged.

He promised that if Congress forms the government in Punjab, then the regime led by Amarinder Singh, will bring a tough law to tackle the drug problem.

Rahul said Congress delivers what it promises to the people unlike other parties who allegedly betray people after coming to power.

Attacking Arvind Kejriwal and AAP, Rahul said the Delhi CM had promised to voters that he will transform Delhi if his party comes to power there, but "now various sections were up against them for befooling the people".

"Ask autorickshaw wallahs, slum dwellers, safai karamcharis, poor, they will tell you the reality," he said hitting out at AAP.

Rahul also said that Kejriwal knows fully well that his game is over in Delhi and he is facing public wrath there, which is why now he wants to become "Punjab's CM".

He, however, said that people of Punjab will never chose an "outsider".

Rahul also said that Congress has always stood for and will always stand for the welfare of the poor, downtrodden, Dalits, small farmers, labourers and other weaker sections and appealed to the public to give the party a chance to serve them in Punjab.

He also talked about the problems faced by the common people in the wake of demonetisation.

Notably, Jalalabad Assembly constituency is witnessing a high-profile contest this time, with two MP of rival parties throwing their hat in the ring to take on Sukhbir Badal.

Rahul on Friday began his Punjab tour by addressing a rally at Majitha, from where Cabinet Minister and Punjab Deputy CM Sukhbir Badal's brother-in-law, Bikram Singh Majithia is seeking re-election for third term.