Urging the electorate to vote for his party, Badal said bringing the SAD-BJP alliance back to power will secure the state's interests. 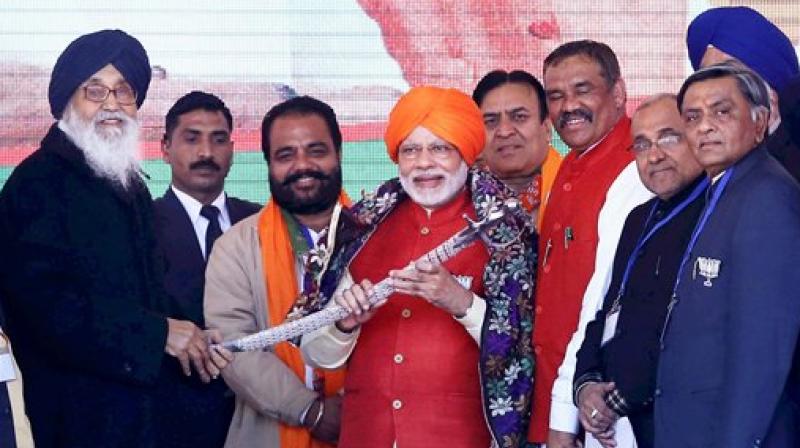 Jalandhar: Punjab Chief Minister Parkash Singh Badal said the SAD-BJP alliance's agenda aims to protect the rights of the state and ensure its development, unlike the Congress' "divide and rule" policy.

"The SAD-BJP alliance's agenda is ensuring development, peace and brotherhood in the state. The Congress' agenda is 'divide and rule'. One side offers progress and peace, and the other destruction, " he said at Prime Minister Narendra Modi's rally in Jalandar on Friday.

Urging the electorate to vote for his party, Badal said bringing the SAD-BJP alliance back to power will secure the state's interests and ensure its progress.

Taking a swipe at the AAP, he alleged, "Their leaders resort to shoe-throwing and stone-pelting. Their policy is divisive while the Congress' is to divide people."

The SAD leader was referring to the shoe-throwing at him in Lambi on January 11 and the stone-pelting of Deputy Chief Minister Sukhbir Singh Badal's cavalcade at Fazilka on January 8.

"Therefore, you should be aware of such leaders and parties that have faulty manifestos and agendas," he cautioned people, adding Punjab ought to see more progress with same governments at the Centre and the state.

"Modiji may turn down request of other chief ministers but whenever I have approached him with plans and programmes for Punjab's development, he never turns it down," Badal claimed.

Raking up the Sutlej-Yamuna-Link (SYL) canal issue, the Chief Minister said, "Punjab's water not only feeds the state but also the nation. Other states get royalty when their resources are used. However, it is not the case here."

Badal also raised the issue of Chandigarh as a separate capital for Punjab and congratulated the Centre for successfully implementing demonetisation in the country.