As president of UP BJP, Dr Bajpai was often seen in Lucknow, riding his scooter with his security guard sitting pillion. 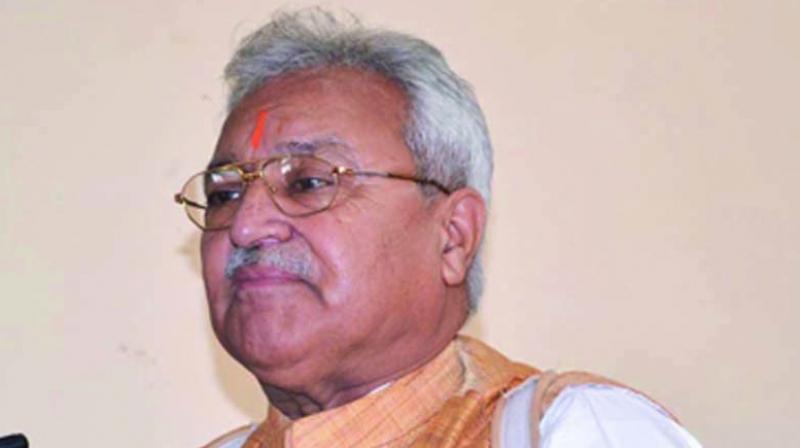 Meerut: They don’t make men like him anymore. Moving around on his quaint blue scooter and chatting up roadside vendors without a cordon of security thrown around him, Dr Laxmikant Bajpai, a four-term MLA from Meerut, demolishes the image of modern day politicians who move around in flashy SUVs with an impressive posse of gun-toting cops.

“I am seeking re-election for a fifth term and I have always been like this. I feel uncomfortable with the paraphernalia but I have nothing against those who prefer this,” he says. As president of UP BJP, Dr Bajpai was often seen in Lucknow, riding his scooter with his security guard sitting pillion. “Initially some people thought I was doing this for publicity but later they became used to seeing me on scooter,” he says.

Dr Bajpai, 62, is a practising ayurveda doctor and is popularly known as “scooter wale Doctor Saheb” in the constituency. He moves around campaigning and also offers free medical advice to voters, many of whom are his patients too. “I have yet to see a politician as accessible and humble as Dr Bajpai. Despite being in the BJP, he is supported by the minorities too,” says Harish Sadhwani, owner of a showroom in Abu Lane.

Dr Bajpai, a former state BJP president under whose tenure the party won 73 Lok Sabha seats in 2014, has his roots in Jan Sangh. He says he was associated with Jan Sangh at the age of 14 and his austere lifestyle is a result of his ideological grooming. Despite living in a communally volatile constituency as Meerut, Dr Bajpai has never been known for making inflammatory speeches or getting into controversies.

“I have raised cases of love jihad and ghar wapsi, but I have never used intemperate language. You can put your views across without ruffling too many feathers. Besides, I have never targeted individuals,” he says. He has kept his two children and wife away from politics. He deals directly with his people and steers clear of “representatives”.