Modi also exhorted youngsters at the rally to download the BHIM app and contribute to a cashless economy. 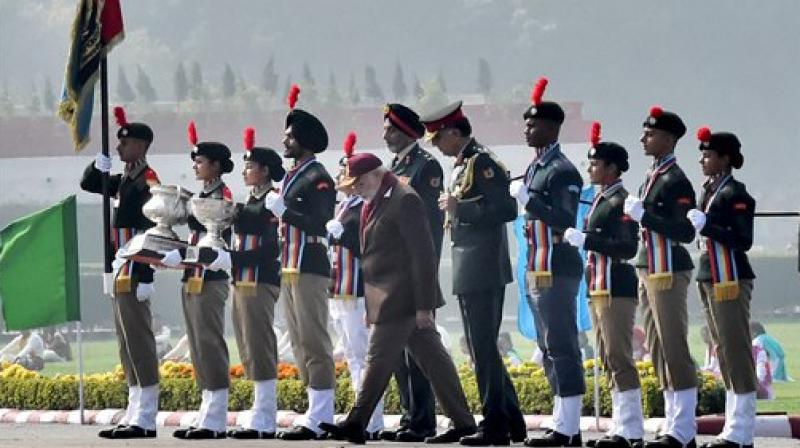 New Delhi: Stressing on unity as the cornerstone of India's strength, Prime Minister Narendra Modi on Saturday said life of a NCC cadet is beyond the uniform, the parade and the camps as it provides a sense of mission.

The NCC experience offers a glimpse of India, its strength and its diversity, he said addressing the NCC rally in New Delhi.

The world wonders how Indians are bound by unity despite so many regions, over 100 languages, 1,500 dialects, and different customs and food habits among others, Modi said.

"It is our country's strength," he said.

Modi underlined that emperors, rulers, governments do not make a nation, but a nation is made by its citizens, youth, farmers, scholars, scientists, workforce, and saints.

He said NCC cadets inspire confidence about the future of India, and instill pride about the strength of our youth.

The Prime Minister appreciated the role of National Cadets Corps (NCC) in furthering the cause of cleanliness. He also called for continuing the movement towards digital transactions.

Modi also exhorted youngsters at the rally to download the BHIM app and contribute to a cashless economy. He said the NCC cadets should educate those around them about digital payments.

Money saved on printing of notes, transportation and ATMs among others could be used for the betterment of the poor, the Prime Minister added.