A joint poster with the slogan 'UP ko yeh saath pasand hai' having the pictures of both Rahul and Akhilesh will be released. 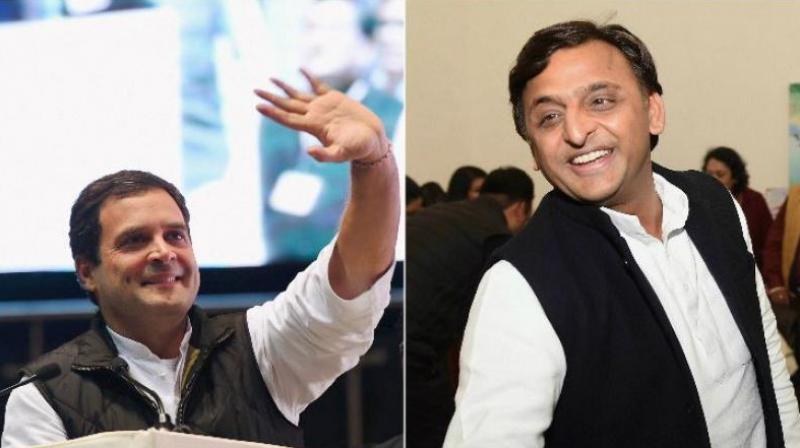 The two leaders, who will come together for the first time after Congress and SP reached a pre-poll alliance with an aim to bag over 300 of the 403 Assembly seats up for grabs, will set the tone for the electioneering with a press conference and a road show.

"The two leaders will address a joint press conference in Lucknow tomorrow afternoon to give a clear message not just to their respective party cadres but also the people of the state of a united effort of the two parties to defeat communal parties," a senior SP leader said.

A joint poster with the slogan 'UP ko yeh saath pasand hai' having the pictures of both Rahul and Akhilesh and their respective party symbols will also be released on the occasion. The 'tricolour' and 'red and green' colours of both the parties will form the border of the posters.

After the press interaction, the two leaders will hold a joint road show across the densely populated areas of the state capital, he said, adding that the road show will start from Gandhi Statue in the Hazratganj area.

The route of the road show has been decided so that it also covers the Muslim-dominated areas besides the areas which have concentration of the youth population.

The two top leaders were previously expected to make a joint announcement about the alliance on January 22, but later the two state chiefs Raj Babbar (Congress) and Naresh Uttam (SP) announced the deal jointly.

Insiders said that joint rallies were also being planned by the two parties at a later stage.

They said the joint press conference would remove any confusion in the minds of voters on the tie-up between the two parties.

Dimple Yadav, MP and wife of the Chief Minister who is believed to have played a major role in cobbling together the alliance, is also likely to remain present besides senior leaders of both the parties.

Under the seat-sharing pact, arrived at after hectic parleys between the two sides, Samajwadi Party has spared 105 seats for its ally Congress.

The two parties were still haggling over some seats in Amethi and Rae Bareli, the parliamentary turf of Congress president Sonia Gandhi and her son Rahul.

Akhilesh was effusive in his praise for the partnership, calling it a "winning combination" and that there was no doubt it would go on to form the next government with a majority. "The cycle (SP symbol) was alone, but now with the help of the hand (Congress symbol), its speed has increased," he had said, sharing the stage for the first time with Congress leader Prem Prakash Agarwal, who will contest from Bareilly.

"Hand on cycle means 300 plus seats," Akhilesh had said.

The alliance is believed to have upset the calculations of rivals BJP and BSP making the contest across the state triangular.

Soon after the alliance was struck, Mayawati got the support of mafia-turned MLA Mukhtar Ansari whose party QED merged with the BSP to consolidate its Muslim vote bank in some constituencies of eastern districts where the Ansari brothers have their strong influence.