PM Modi, Nitish Kumar to share stage in Patna on March 3 ahead of LS elections

This rally is to be held a month after the Congress’ scheduled ‘Jan Akansha Rally’ on February 3, where Rahul Gandhi will be present. 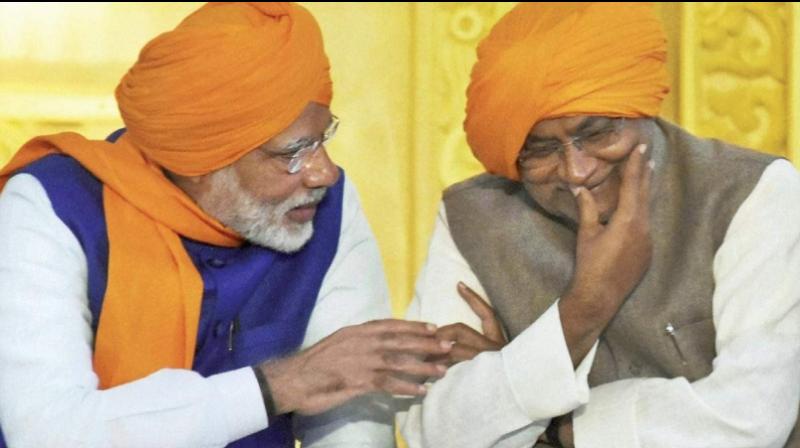 The announcement was made on Sunday at a joint press conference held by the JD(U), the BJP and the LJP. (Photo: PTI)

Apart from these, several other senior leaders from all three member parties of the NDA to be present at the mega rally.

The announcement was made on Sunday at a joint press conference held by the JD(U), the BJP and the LJP.

Notably, the NDA rally will be held precisely a month after Congress' "Jan Akanksha Rally", which is to be addressed by Rahul Gandhi – and will be a show of strength for the opposition.

They said that BJP president Amit Shah will also be requested to attend the rally, where workers of all the three NDA constituents would gather from across the state.

State JD (U) president Bashistha Narayan Singh, at a joint press meet attended by BJP and LJP state presidents Nityanand Rai and Pashupati Kumar Paras, said, “The NDA will highlight people-centric initiatives taken under the leadership of Prime Minister Narendra Modi in the country and chief minister Nitish Kumar in the state.”

“It will be the mother of all rallies. We expect that the organisational strength of the three parties will be able to mobilise record public participation, which, we believe, will be facilitated by a favourable disposition towards the development work done by respective governments,” Singh said.

LJP state president Pashupati Kumar Paras said the March 3 rally will be historic in terms of public participation in the last 30-40 years. “It is essentially an election rally and BJP president Amit Shah and other senior NDA leaders will be present. The ECI is likely to notify poll dates between March 6 and 10,” he said.

To a query whether the rally was being organised on March 3 to pre-empt the Opposition from organising a joint rally, the BJP state president said, “It is a Sunday and, therefore will not cause inconvenience to school children or office goers.”

BJP state president Nityanand Rai also said, “We have an excellent track record. We don’t fear the Opposition as we will expose them. We will win 40 out of 40 LS seats under the leadership of Nitish Kumar in the state.”