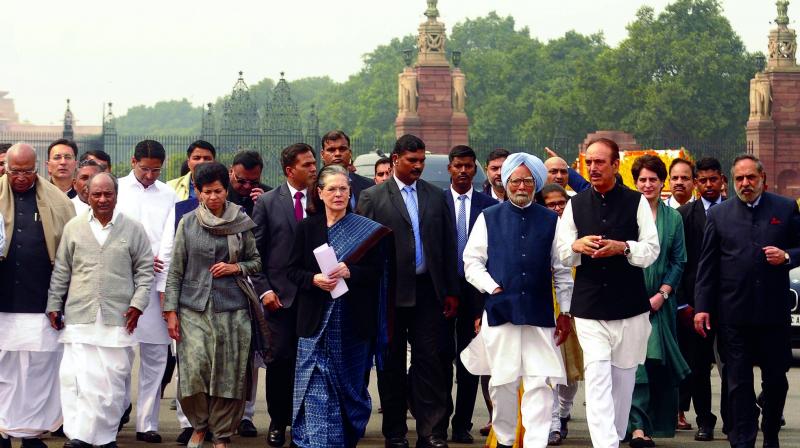 New Delhi: Congress president Sonia Gandhi on Thursday marched to the Rashtrapati Bhavan along with other senior leaders of the party, including former Prime Minister Manmohan Singh, and asked President Ramnath Kovind to remove home minister Amit Shah for “gross ineptitude, abdication of duty and his inability to contain the situation” in violence-hit northeast Delhi.

Accusing the Central government of not taking any active steps to remove, remedy or diffuse the situation, Mrs Gandhi said, “The Central government as also the newly-elected Delhi government, have remained mute spectators as completely mindless rage, designed violence and organised looting of property has continued unabated”.

“Due to the complete inaction on the part of the home minister and the Central government, the violence has claimed the lives of at least 34 people and over 200 have been injured at last count. Several crores worth of properties and business have fallen prey to unchecked arson and looting,” she told the media after meeting the President. She said that the Congress delegation asked Mr Kovind to remind the government of its Constitutional duty and the pillars of “Raj Dharma”, by which any just government must abide.

“We call upon you and the Constitutional Office you hold, that the life, liberty and property of the citizens is preserved, secured and protected. We also reiterate that you should immediately call for the removal of the home minister given the gross ineptitude, abdication of duty and his inability to contain the situation. We owe this to the citizens who have lost their loved ones, their homes, their livelihood and most of all their long-cherished amity and brotherhood. We hope you will take decisive action in the matter,” she said.

Dr Singh said the Congress leaders requested the President to use his power to call upon the Central Government to protect and preserve its “Raj Dharma” so that the citizens of this country and this national capital are assured of peace tranquillity and justice.