The party advocates reservation in jobs and education in private sector for SCs and STs. 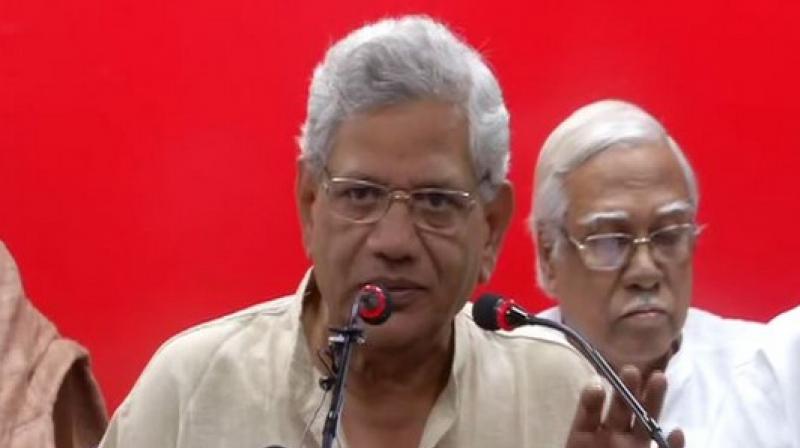 Polling for the 17th Lok Sabha elections will be held in seven phases beginning from April 11 and will go on till May 19. (Image: ANI)

New Delhi: The Communist Party of India (Marxist) (CPI-M) released its manifesto here on Thursday calling for scrapping of sedition law in its present form, restoration of wealth tax, and seeking urban job guarantee scheme among others.

The party also sought a legislation with regard to farmers’ right to sell their produce at a Minimum Support Price (MSP), which is at least 50 per cent higher than the total cost of production.

In its manifesto, the CPI-M advocated for a statutory minimum wage for workers of not less than Rs 18,000 per month and wages linked to Consumer Price Index.

The CPI-M manifesto underlined the need of a universal public distribution system with provision of 35 kg of foodgrains per family, or, 7 kg per individual at a maximum price of Rs 2 per kg.

The party also called for raising of taxes on the rich and corporate profits, restoring wealth tax for the super rich, introduction of inheritance tax and restoration of long-term capital gains tax in order to bridge 'obscene levels' of widening economic inequalities in the country.

For safeguarding digital rights, the CPI-M advocated the need to enact data privacy laws to protect the people against misuse of their private data for commercial use and to curb monopolies that use either telecoms or internet service platforms.

The party called for the recognition of digital infrastructure as a public good. "There should be stoppage of bulk surveillance by state agencies under Section 69. There should be clear provisions and judicial supervision of any surveillance that violates citizens' privacy," the manifesto said.

The CPI-M advocated the right to free health care, end private insurance led healthcare and called for the public expenditure on health to be raised to 5 per cent of GDP. The party advocates reservation in jobs and education in private sector for SCs and STs.

The manifesto said that there is a need of major expansion of public educational system – schools and higher education – with quality upgradation, and public expenditure on education should be fixed at 6 per cent of GDP.

The CPI-M in the manifesto said that right to work should be recognised as a constitutional right and there should be a provision of unemployment allowance for jobless.

The manifesto advocated the implementation of one-third of reservation for women in Parliament and state assemblies and underlined the need for comprehensive steps to end violence against women and children.

"Old age pension with minimum monthly pension which is not less than half the minimum wage, or, Rs 6,000 per month, whichever is higher, for all citizens," the manifesto said.

The CPI-M is in favour of halting privatisation of public sector enterprises and rolling back privatisation in defence, energy and railways and basic services. Its manifesto calls for the reformation of electoral system by the introduction of proportional representation with partial list system, scrapping of electoral bonds and state funding in kind for electoral expenses.

Apart from the manifesto release, the CPI-M released a video highlighting the 'failure' of the promises made by the Narendra Modi government, including ensuring Rs 15 lakh in every person's bank account, creation of two crore jobs and so on.

Polling for the 17th Lok Sabha elections will be held in seven phases beginning from April 11 and will go on till May 19. The counting of votes will be done on May 23.