BJP may drop many MLAs to retain Gujarat

Congress plans to project Shankersinh Vaghela as its CM nominee. 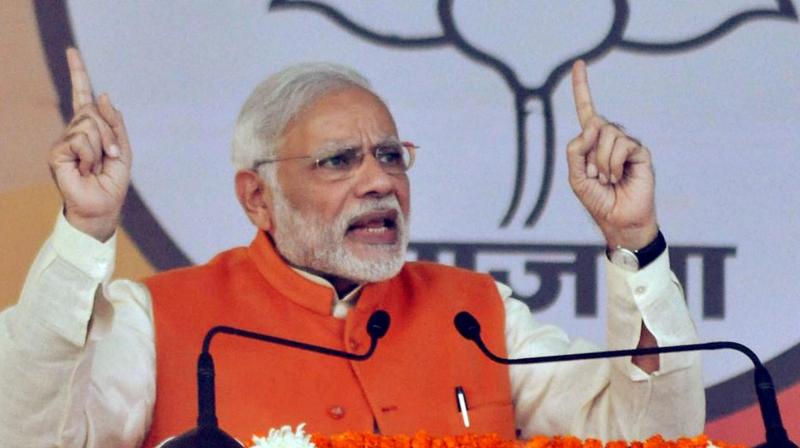 Prime Minister Narendra Modi will continue with his monthly visits to the state till the elections are over. (Photo: PTI)

New Delhi: Carrying forward its strategy of fielding new faces before each electoral battle, the BJP leadership is mulling the idea of denying tickets to a considerable number of its MLAs for the Gujarat Assembly elections slated later this year.

Gearing up to take on the BJP, the Congress is looking at the possibility of projecting old warhorse Shankersinh Vaghela as its chief ministerial candidate.

The Congress’ new general secretary in charge of Gujarat, Ashok Ghelot, will reach Ahmedabad this weekend to work out a consensus in favour of Mr Vaghela, sources said.

Prime Minister Narendra Modi will continue with his monthly visit to the state till the elections are over. The BJP wants to win the state — home turf of PM Modi — with a massive margin. BJP president Amit Shah has announced “Mission 150” for Gujarat which has 182 Assembly berths.

Aware that after the unprecedented victory in Uttar Pradesh the BJP has a massive edge, the Congress is focusing on the so-called “saffron weak areas”, which include tribals, dalits and Muslims. The Congress is planning to organise a rally to be addressed by party vice-president Rahul Gandhi in a tribal-dominated area in eastern Gujarat in the first week of May.

The Congress is now inching towards the possibility of joining hands with the leader of the Patidar community, Hardik Patel. Sources said that Mr Patel has indicated his “willingness to ally with the Congress.” Apparently it’s the Congress that is yet to take a final call on the issue.

The combined population of tribals (14.75%), dalits (7.5%), Muslims (9.7%) and Patidar (25%) is over 50 per cent. However, with the BJP already focusing on the Patidar community, and the dalits having favoured the lotus brigade in UP, it would be a difficult task for the Congress to consolidate these vote banks completely in its favour.

Mr Shah has appointed an OBC face, Bhupender Yadav, as in-charge of Gujarat to woo the backward community. In Surat, known as a Patidar bastion, PM Modi had on April 16 held a 12-km roadshow to soothe the frayed nerves of the community.

Incidentally Surat had emerged as the nervecentre of the Patidar quota agitation. Though the Congress was apparently leaning towards Mr Vaghela, the main task of Mr Ghelot would be to resolve differences between the warring factions within the state unit.

At this juncture, four factions within the Congress have locked horns. These are led by Bharatsinh Solanki, Shaktisinh Gohil, Arjun Modhwadia and Mr Vaghela. All these Congress leaders want a shot at the CM’s chair. Some of these leaders are also against joining hands with Hardik Patel. Mr Ghelot’s apparent task will be to settle the differences among the leaders and quell any resistance against Hardik Patel.