India   Politics  28 Apr 2022  KCR: Will do everything for alternative political agenda
India, Politics

KCR: Will do everything for alternative political agenda

Referring to the BJP-led government at the Centre, Rao said it was built on a foundation of lies 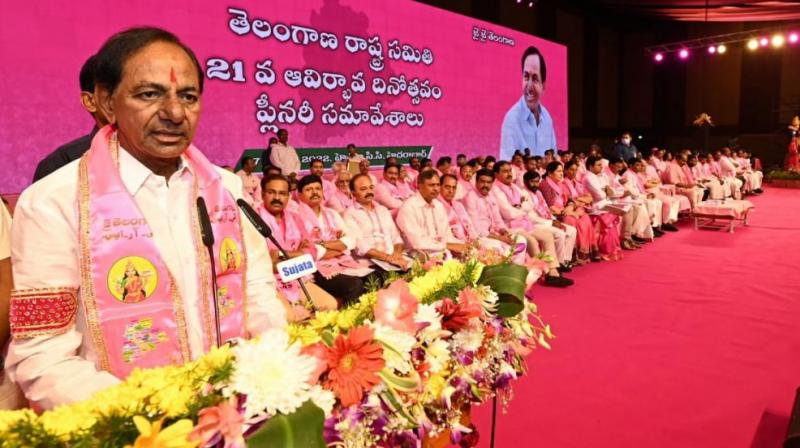 Chief Minister K Chandra sekhar Rao and his ministers during the TRS Plenary meeting on the occasion of TRS 21st Foundation day at HICC on Wednesday. Photos By Arrangement.

Hyderabad: TRS president and Chief Minister K. Chandrashekar Rao on Wednesday declared that he would do everything he could to ensure that India got an alternative political agenda to take the country forward. Addressing the TRS plenary to mark the party completing 21 years here, Rao said that he had heard party leaders all day and the verdict was clear – the country needed his leadership.

“On behalf of Telangana, I will take 100 per cent the responsibility. This is not about some fronts or tents, it is about going beyond routine politics that have, for the past 75 years, stymied the progress of the nation,” he said.

Rao, who spoke twice, at the beginning of the plenary and at the end, said that what he had witnessed throughout the day had convinced him that the TRS had the leaders who understood the needs of the nation. “I am seeing a party that will stand like a strong fort,” he said.

Referring to the BJP-led government at the Centre, Rao said it was built on a foundation of lies. “The country has crashed on all parameters, there are failures on all fronts,” he declared, adding that all that the BJP did was to whip up passions in the run-up to every election to polarise the people for political gains.

Rao said he was not attempting to bring a few political parties or Chief Ministers together to form a front, as was being reported in the media, but was only trying to set a “people’s and development agenda’ before the country.

Amid loud slogans of 'Desh Ki Neta KCR' by 3,000 party delegates at the party plenary here,

Rao said the TRS would play its role in influencing national politics to bring about structural changes. He said if a beginning was made from Telangana and Hyderabad, the state would be proud.

The CM said that when Communist party leaders had recently approached him with a proposal to join hands to "dislodge" the BJP at the Centre, he had refused saying his aim was not to do politics to dislodge someone from power or make someone the Prime Minister.

"Some people ask me whether I am setting up an anti-BJP front or some other front. Several fronts came up in the past but yielded nothing. It's not about changing governments. It should be about changing our policies for the better,” Rao said.

“We need a common agenda, a new integrated agricultural and industrial policy. What we need is a people's agenda and not a front where two to three parties or CMs come together,” Rao said.

He said that some people had doubted whether or not the TRS had the resources to go national, and added that with 60 lakh active members it would not be difficult to raise Rs 600 crore with an average contribution of Rs 1,000 per head. “Some said they will provide funds in the crores, some may be able to give just a few rupees. But resources are not a problem, manpower is not a problem, and the leadership in the TRS is an asset,” he said.

“People ridiculed us when we spoke about Telangana state 21 years ago. Look where we are now. That is the kind of process we want to unfold for the nation too. Let's see what shape this process will take," Rao remarked.

The CM alleged that the Centre was misusing the office of Governor to trouble state governments ruled by Opposition parties. "In West Bengal, Maharashtra and Tamil Nadu, the Centre is playing politics using Governors," Rao added.