This is the second time Modi has emerged victorious from Varanasi parliamentary seat. 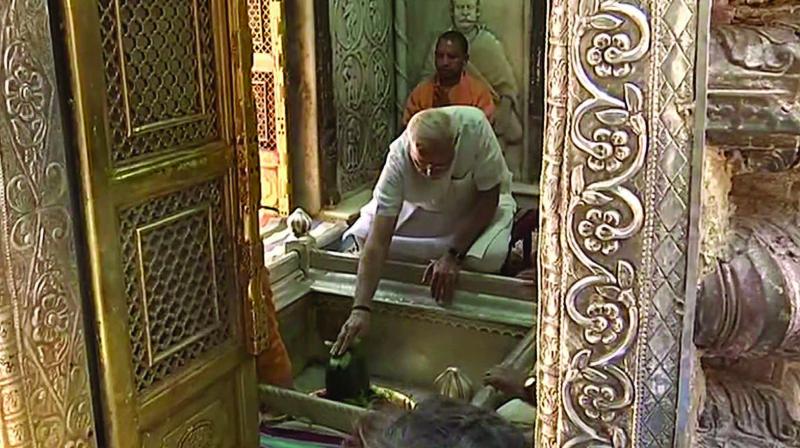 New Delhi/Varanasi: Four days after he steered the Bharatiya Janata Party (BJP) to a landslide victory in the Lok Sabha elections, Prime Minister-elect Narendra Modi was back in Varanasi on Monday to thank voters, party workers and offer prayers at the Kashi Vishwanath temple. Thanking the electorate, Mr Modi said that despite facing “political untouchability” and political violence, the BJP has worked on its chemistry with people to beat all poll arithmetic.

“Political pundits are not aware that their thinking and logic is meant for the 20th century. Results show that beyond arithmetic there is chemistry and this time chemistry has triumphed over arithmetic,” Mr Modi said while addressing people.

Calling himself a “sevak” of Varanasi, Mr Modi offered prayers at the Kashi Vishwanath temple after a roadshow.

“For the country I am the PM, but for you I am your MP, I am your sevak,” he told the Varanasi electorate.

Mr Modi was accompanied by BJP president Amit Shah and Uttar Pradesh chief minister Yogi Adityanath. An LED screen had been installed at the entrance of Kashi Vishwanath temple that live-streamed visuals from inside as PM Modi offered prayers.

This is the second time Mr Modi has emerged victorious from Varanasi parliamentary seat. He won by a margin of 4,79,000 votes.

Wondering aloud why political pundits still considered his party as one that belongs to the Hindi heartland, Mr Modi said at a meeting of BJP workers, “There is no region
where the BJP’s poll percentage is not rising. We have a government in Assam, getting elected in Ladakh yet political pundits say (ours is) Hindi heartland politics. This is a misconception that has been created.”

While admitting that politics is about perception, Mr Modi lamented that a wrong impression had been created about his party through lies and wrong logic. “Because of this wrong awful perception, people do not like standing with us. But those creating bad and wrong perception can be defeated with the help of transparency and hard work. This is the strategy to trounce it,” he said.

Mr Modi also talked about the dangers faced by the BJP in the form of “political untouchability” and political violence.

“Take the cases of Kerala or Kashmir, Bengal or Tripura… (These cases) will not come in the media. Some people have selective sensitivity. Hundreds of workers have been killed only for political ideology. In Tripura workers were hanged, in Bengal murders are still on, in Kerala too... Perhaps in India only one political party has faced such killings. Violence has been given legitimacy. This is a danger before us… Babasaheb Bhimrao (Ambedkar) and (Mahatma) Gandhi had shunned untouchability but, unfortunately, political untouchability is rising... BJP workers were murdered,” he said.

Mr Modi’s remarks assumed significance in the light of the murder of the BJP leader in Amethi in the first post-poll violence in Uttar Pradesh.

Mr Modi said that despite such hatred, BJP’s mantra remains “Sabka Saath, Sabka Vikas” and unlike others his party has not come under the pressure of vote bank politics that has “spoiled” democracy.

Stressing on the significance of Opposition in democracy, he said, “When others come to power, there is no sign of Opposition.” He cited the example of Tripura where there was no Opposition during the decades of Left rule but “now that we are in government there is a ‘jaandar and shandar vipaksh’. This is the spirit of democracy.”

“Work and workers create wonders,” Mr Modi said, giving full credit for his victory to workers at the grassroots level for creating awareness about his government’s policies and programmes for the people.