Gandhi was on April 9 summoned by the court of Additional Metropolitan Magistrate S K Gadhvi to appear before it on May 27. 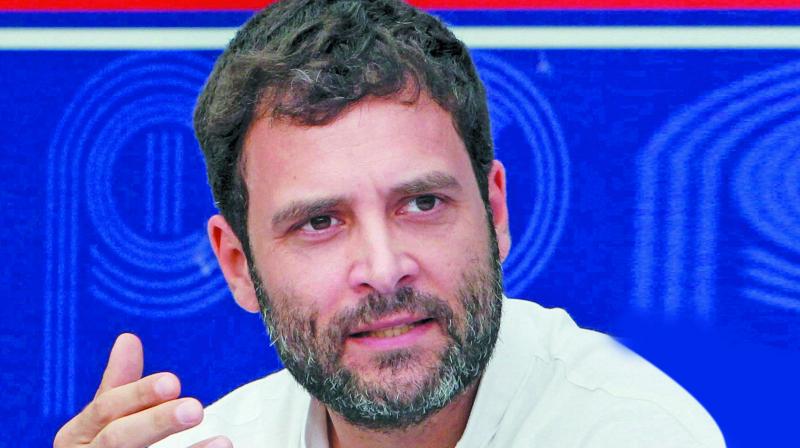 Congress chief Rahul Gandhi to appear before it in connection with criminal defamation suits filed against him by the Ahmedabad District Cooperative Bank and its chairman Ajay Patel. (Photo: File)

Ahmedabad: A court here has asked Congress chief Rahul Gandhi to appear before it in connection with criminal defamation suits filed against him by the Ahmedabad District Cooperative Bank and its chairman Ajay Patel.

The complainants had moved the court last year after Gandhi and Congress national spokesperson Randeep Singh Surjewala reportedly alleged that the bank was involved in a "scam" to convert scrapped notes worth Rs 745.59 crore within five days of demonetisation announcement on November 8, 2016.

Gandhi was on April 9 summoned by the court of Additional Metropolitan Magistrate S K Gadhvi to appear before it on May 27.

But his counsel Monday sought more time for his client's appearance on the ground that the documents pertaining to testimonies of the complainants and witnesses were yet to be translated into English from Gujarati.

Gandhi's counsel also submitted before the court that his client will be at Shantivan in New Delhi on May 27 to pay tribute to India's first prime minister Jawaharlal Nehru on his death anniversary.

The complainants have said that the two leaders levelled "false and defamatory allegations" against the bank.

Based on testimonies of Patel as well as three other witnesses recorded on August 27 last year, the court had conducted an inquiry under section 202 of the Criminal Procedure Code (CrPC) before summoning Gandhi and Surjewala.

The CrPC section deals with inquiry into a case to decide whether or not there is sufficient ground for proceeding. BJP president Amit Shah is one of the directors of the ADCB.

The allegations were made by Gandhi and Surjewala on the basis of a response given by the National Bank for Agriculture and Rural Development to an RTI query filed by a Mumbai-based activist.

In the pleas filed through their lawyer, the ADCB and Patel had submitted before the court that the statements made by the two Congress leaders were false because the bank did not exchange such a huge amount of money.

They had said the bank did not have so much (demonetised) money to exchange and claims of Gandhi and Surjewala were defamatory.