Amit Shah said, 'This bill is not to please anyone but for those living near the International Border.' 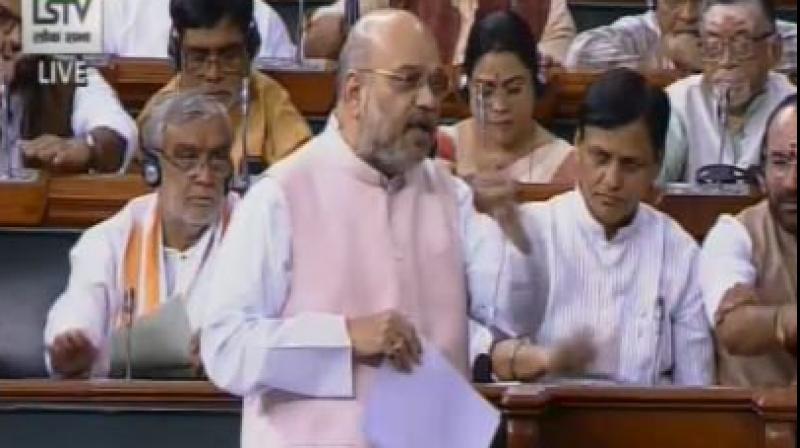 While tabling the bill in the house, Shah said, "This bill is not to please anyone but for those living near the International Border. Over 3.5 lakh people will be benefitted from it."

"We are monitoring the situation in Jammu and Kashmir. Construction of bunkers in border areas will be done within time limit set by the former home minister Rajnath Singh Ji. Life of every individual is important to us," Shah further said.

Talking about the successful conduct of Panchayat elections, Shah said, "Panchayat elections were not conducted in Jammu and Kashmir for many years. But in the last one year, our government held elections in more than 4,000 panchayats. Now, over 40,000 panch and sarpanch are serving for the people."

"Elections in the state have been bloody in the past, but there was no violence during Lok Sabha elections. Law and order situation has improved considerably," he added.

"This House approves the continuance in force of the Proclamation dated the 19th December 2018 in respect of the State of Jammu and Kashmir, issued under article 356 of the Constitution by the President, for a further period of six months with effect from July 3, 2019," the resolution said.

A Bill which proposes to give reservation in government jobs and educational institutions to those living within 10 km of the International Border in Jammu and Kashmir and bring them under the ambit of reservation at par with persons living in areas adjoining the Line of Actual Control (LAC) was introduced in the Lok Sabha by Union home minister Amit Shah on Monday.

The Jammu and Kashmir Reservation (Amendment) Bill, 2019 had been cleared by the Union Cabinet under the chairmanship of Prime Minister Narendra Modi on June 12.

The Bill will replace the Jammu and Kashmir Reservation (Amendment) Ordinance, 2019, which was cleared by President Ram Nath Kovind on February 28.

In its statement of purpose, the Bill states that due to the existing instability, people living in border areas of Jammu and Kashmir are often forced to move out of their homes and move to safer places, which impacts their education.

In order to bring them into the mainstream, it was felt justifiable to extend the reservation benefits to these people.

The Bill would allow the youths of Jammu and Kashmir who are from economically weaker sections belonging to any religion or caste to aim for the government jobs.