Amit Shah game for debate on China with Rahul 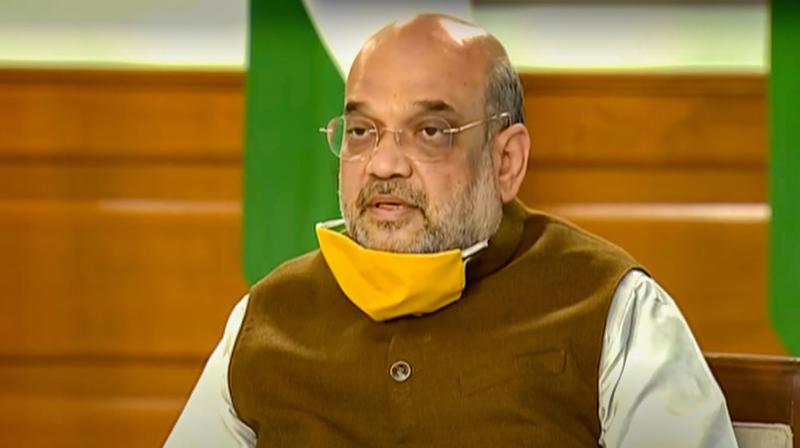 New Delhi: Union Home Minister Amit Shah has accused Congress leader Rahul Gandhi of doing "ochhi rajniti" (shallow minded politics) and making remarks "liked by" China and Pakistan during border tensions with China and asserted that the government was prepared for a debate in Parliament from 1962 war onwards till now.

In an interview with ANI, Home Minister Amit Shah said Rahul Gandhi should introspect that his hashtag of 'Surender Modi' is being encouraged by Pakistan and China.

He said that the government was fully capable of handling anti-India propaganda but it was painful when a former President of such a big political party indulges in shallow minded politics at a time of crisis.

"Yes we are fully capable of handling anti-India propaganda but it does pain when a former President of such a big political party does "ochi rajiniti (shallow minded politics) at a time of problems. It is a matter of self-introspection for him and Congress that his hashtag is being taken forward by Pakistan and China. It is not for me. It is a matter of concern for Congress that hashtag of their leader is being encouraged by Pakistan and China. You say what China and Pakistan like. And at this time of crisis," added Amit Shah.

He was asked about a hashtag going viral last week about `Surender Modi' remarks of Gandhi and it gaining traction in China and Pakistan.

Sidestepping a pointed question asked by ANI, if at present there were Chinese troops on Indian soil, Home Minister Amit Shah said that it was not the appropriate time to comment on the situation at the LAC and that "briefings were on going and if the need arose, he would answer." The Minister added that he wished to limit the scope of this interview to Delhi's battle with Covid, wherein measures taken by Centre and Delhi Government were highlighted to ease any "panic" that could have risen in the city due to rise in cases.

Amit Shah, however, responded to tweets made by Rahul Gandhi that were critical of the Government's response to the situation at the LAC with China.

"If you want to discuss, we will. Let all be discussed from 1962 to today. No one is afraid of discussion. But when the soldiers of the country are making efforts, the government is taking solid steps after taking a stand. At that time, making statements that please Pakistan and China, this should not be done," he said.

Asked about Congress accusing BJP of lack of democracy over its attack on the party on Emergency, Amit Shah asked if there has been any Congress president from outside Gandhi family after Indira Gandhi and asked what democracy does Congress talk of.

"Democracy is a very comprehensive word. Discipline and independence also have their value. Beyond all this, I want to say one thing. I want to ask you. After Advaniji, Rajnathji, Nitinji, Rajnathji again, I became (party president) and now Naddaji. Is there a member of the same family? After Indiraji, tell me a Congress President who is outside the Gandhi family. What democracy they talk about?" said Shah.

On Friday, Gandhi posted a video and said Prime Minister Narendra Modi should tell "the truth" as several accounts were saying that China has made incursions in Eastern Ladakh.

In his tweets, Gandhi has accused Prime Minister of "publicly supporting" China's claim, termed him as "Surender Modi" and alleged that "PM has surrendered Indian territory to Chinese aggression".