Pawar tweeted a picture of him at the steering wheel of a vehicle and CM Thackeray sitting next to him on the passenger’s seat. 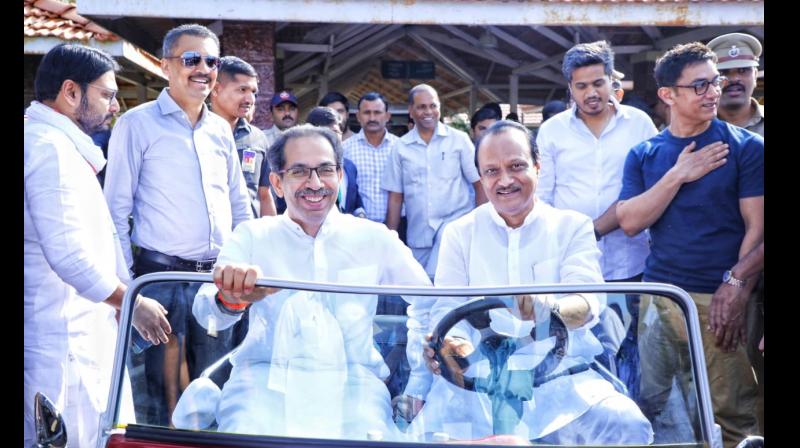 Mumbai: On his 60th birthday, the first after becoming the Chief Minister of Maharashtra, Uddhav Thackeray was greeted by one and all, including Prime Minister Nardendra Modi on Monday.

However, the most notable wish came from the deputy CM Ajit Pawar, who wished him with a picture showing him driving on the driving seat.

At the stroke of midnight on Sunday, Pawar tweeted a picture of him at the steering wheel of a vehicle and CM Thackeray sitting next to him on the passenger’s seat. “Best wishes to the Chief Minister of Maharashtra, Shiv Sena party president and MVA leader, Uddhav Thackerayji. Wish you a healthy & long life!” tweeted Mr Pawar, who was among the first to wish the CM.

However, the picture was enough to create a flutter in the political circles of Maharashtra with many calling it as a veiled message to Thackeray about his claims that he was in firm control of the ‘steering wheel’ of the Maharashtra Vikas Aghadi (MVA) government.

Uddhav, in a recent interview to his party mouthpiece ‘Saamana’ had said, “The future of my government is not in the hands of the opposition. It is a strong government and I am at the steering wheel with two other partners sitting behind. A three-wheeler rickshaw is a vehicle of poor people.”

Quick to pouch on Pawar’s comment, BJP leader Ram Kadam retweeted Pawar’s tweet, saying, “Exactly in whose hands is the steering wheel of the state?”. However, in an apparent reconciliation attempt, Pawar himself went to visit Mr Thackeray in the evening at his residence and wished him personally.