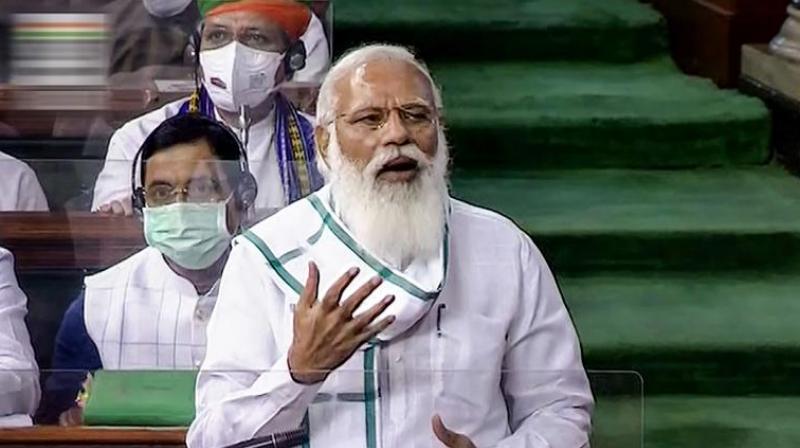 Modi later said the Congress was not allowing Parliament to run and he asked his party members to “expose this behaviour of the Opposition parties in front of the media and the public". LSTV/PTI

New Delhi: Both Houses of Parliament were forced to adjourn on Tuesday as an unrelenting Opposition raised issues relating to the alleged Pegasus snooping, the Assam-Mizoram border violence and the three farm laws which the government is determined not to repeal. The Rajya Sabha managed to briefly hold discussion on the Covid-19 impact on MSMEs and pass the Marine Aids to Navigation Bill 2021 while the Lok Sabha passed the Factoring Regulation Bill 2020 and the National Institutes of Food Technology and Management Bill 2021.

With Parliament remaining nearly non-functional for the sixth day, the BJP leaders went into a huddle to rework their political strategy for the ongoing Monsoon Session.

Prime Minister Narendra Modi, defence minister Rajnath Singh, BJP chief J.P. Nadda, parliamentary affairs minister Pralhad Joshi and other leaders attended the BJP parliamentary party meeting on Tuesday. Mr Modi later said the Congress was not allowing Parliament to run and he asked his party members to “expose this behaviour of the Opposition parties in front of the media and the public”.

The protests in the Lower House began immediately after the MPs paid homage to former Mauritius Prime Minister Anerood Jugnauth and Kenneth Kaunda, Zambia’s first President. Lok Sabha Speaker Om Birla assured the Opposition of allowing a discussion on any issues they wish to raise, but for that decorum must be maintained in the House and the proceedings should not be disrupted.

Raising the clash between the Assam and Mizoram police and security personnel, Congress MP from Assam Gaurav Gogoi sought a probe and a discussion in the House. The Congress is sending a seven-member panel to the areas affected by the violence. Congress leader Rahul Gandhi in a tweet blamed Union home minister Amit Shah for the escalation of violence that led to the deaths of Assam police personnel. “The home minister should take responsibility as the police build-up did not take place overnight but has been going on for months. Such a situation has been developing between Assam and Arunachal, Meghalaya and Nagaland. Tomorrow, our team will go to the spot to get a sense of the real situation. Accepting responsibility, the home minister should order an inquiry,” Mr Gogoi said.