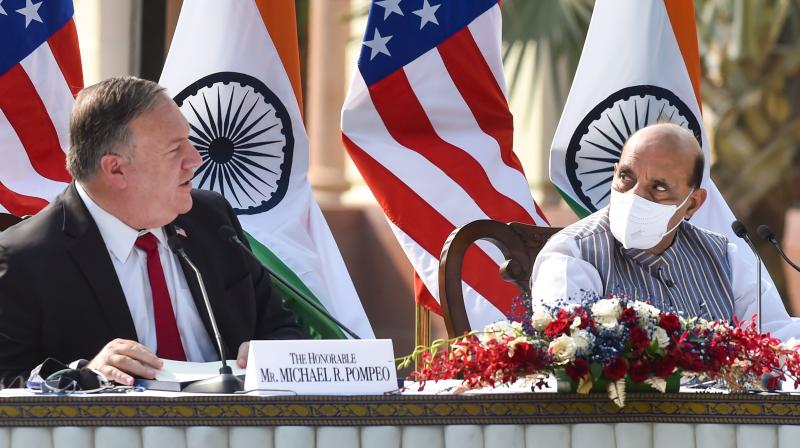 New Delhi: With the country involved in a six month military stand-off with China, Defence minister Rajnath Singh on Tuesday told US that India is "challenged by reckless aggression on our northern borders."

"In the area of defense we are challenged by reckless aggression on our northern borders," Singh said in his opening remarks during the two-plus-two dialogue with US, as per the transcript released by the US State department.

India and US on Tuesday signed the Basic Exchange and Cooperation Agreement for Geo-spatial Cooperation (BECA) which takes the military cooperation between the two countries to the next level. BECA will allow sharing of military grade geo-spatial data in real time to India by US which will be help Indian military to launch precise  missiles and drone strikes. The signing of the agreement is also a strategic signal to China. As per the experts, BECA will also allow India to buy armed drones from US which will be fed with the data. The current conflict between Armenia and Azerbaijan has underlined the importance of armed drones during a war.

Later on during a joint press conference, Mr Singh said  that India and US military to military cooperation is progressing well.

Mr Singh said that signing of BECA by India and US is a significant achievement.

He said during the meeting both sides shared assessment of the security situation across the Indo Pacific. "In that process, we reaffirmed our commitment to peace, stability and prosperity of all countries in this region. We also agreed that upholding the rules based international order, respecting the rule of law and freedom of navigation in the international seas and upholding the territorial integrity and sovereignty of all states are essential," said Mr Singh. He said India and US defence cooperation is intended to further these objectives. Mr Singh said that both sides welcomed Australia joining the forthcoming trilateral (India, US, and Japan) naval exercise Malabar.

"During the meeting today, we have had comprehensive discussions on key aspects of our bilateral and multilateral cooperation. We considered the major challenges we face," said Mr Singh.

He said that liaison officer's at each other's establishments could be leveraged to enhance our information sharing architecture.

''In today's meeting we also explored probable capacity building and other joint cooperation activities in third countries, including our neighbourhood and beyond. We have convergence of views on a number of such proposals and will take those forward," said Mr Singh. Defence minister said that he welcome the acceptance of "our request for cooperation in the advanced field of maritime domain awareness." Both sides agreed to comprehend the requirements and initiate processes for joint development of requisite systems and expertise, he said.

BECA is last of the four basic agreements which US signs with its close  strategic and defence allies. US and India have already signed three other foundation agreements which are General Security Of Military Information Agreement (GSOMIA),