Now, anyone can buy property in Jammu and Kashmir after Govt amends laws

Several changes have been made to land laws, including allowing use of agricultural land for setting up facilities of public purpose 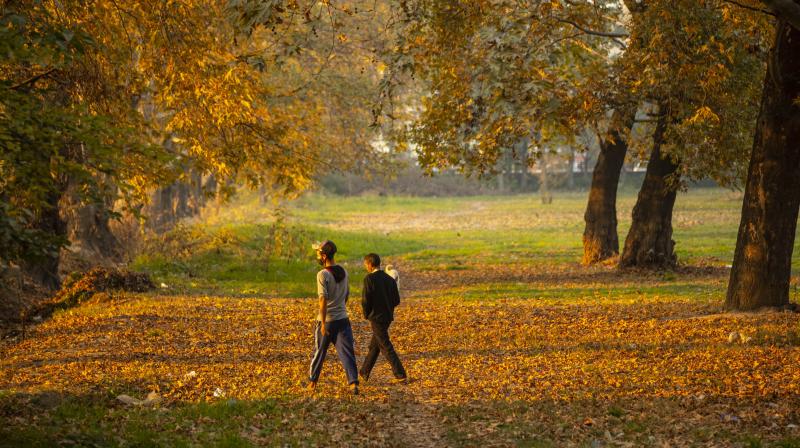 Kashmiri men walk though a garden lined with dried leaves of Chinar trees in Srinagar. (AP)

Srinagar: The Centre has paved the way for people from outside Jammu and Kashmir to buy land in the Union Territory by amending several laws, drawing sharp reaction from various political parties and leaders in J&K barring the BJP. The People's Alliance for Gupkar Declaration (PAGD) -- an amalgam of seven mainstream parties in Jammu & Kashmir — termed the move as a deliberate attempt to usurp the rights of the people of the erstwhile state.

More than a year after the nullification of Articles 370 and 35A of the Constitution, the Union ministry of home affairs on Monday evening in a gazette notification in Hindi and English announced that several changes have been made to land laws, including allowing use of agricultural land for setting up facilities of public purpose.

The most important tweak has been made in the Jammu and Kashmir Development Act that deals with disposal of land in the Union Territory as the Centre has omitted the phrase "permanent resident of the state" from Section 17 of the law.

The PAGD condemned the repeal of J&K Land Laws saying that it strips the permanent residents of J&K and Ladakh of their exclusive right to acquire and hold immovable property and vowed to fight these on all fronts.

"Unacceptable amendments to the land ownership laws of J&K. Even the tokenism of domicile has been done away with when purchasing non-agricultural land and transfer of agricultural land has been made easier. J&K is now up for sale and the poorer small land holding owners will suffer," National Conference leader Omar Abdullah tweeted.

PDP president Mehbooba Mufti said it was a step to "disenfranchise" the people of Jammu and Kashmir. "Yet another step that's part of GOI's nefarious designs to disempower & disenfranchise people of J&K. From the unconstitutional scrapping of Article 370 to facilitating loot of our natural resources and finally putting land in J&K up for sale," she tweeted.

“After failing on all fronts to provide roti & rozgar to people, BJP is creating such laws to whet the appetite of a gullible electorate. Such brazen measures reinforce the need of people of all three provinces of J&K to fight unitedly,” she alleged.

Before the repeal of Article 370 and Article 35-A in August last year, non-residents could not buy any immovable property in Jammu and Kashmir. However, the fresh changes have paved the way for any citizen to buy land in the Union Territory.

People’s Conference chairman and former minister Sajad Gani Lone who is the spokesman of PAGD said the MHA order was a “huge betrayal” and a “massive assault” on the rights of the people of J&K and Ladakh besides being “grossly unconstitutional”.

On Monday evening, the MHA repealed twelve out of J&K’s 26 land laws and adopted changes or substitutes with the rest. The amendments in the Jammu and Kashmir Development Act allow the buying of land by anyone as words such as domicile or Permanent Resident Certificate (PRC) holders do not find any mention.

The MHA said that the new order will be called the Union Territory of Jammu and Kashmir Reorganisation (Adaptation of Central Laws) Third Order, 2020, and that it comes into force with immediate effect.