Responding to it, Naidu said the protestors were hired by ruling YSR Congress Party. 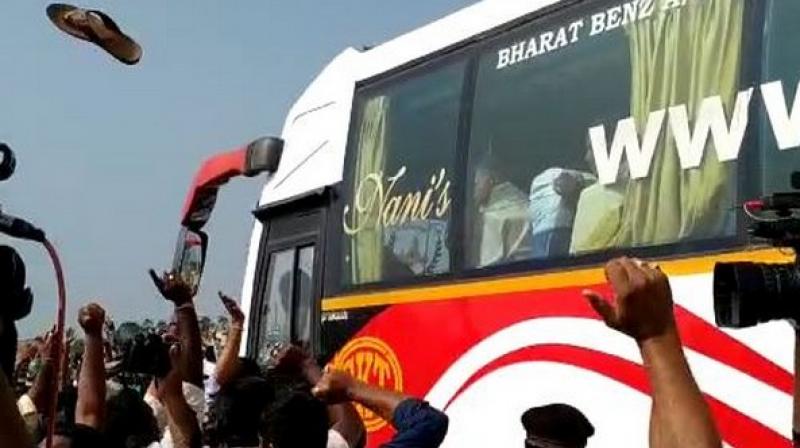 The slipper, hurled by someone from the public, hit the side-window of his seat of the bus he was travelling in. (Photo: ANI)

Amaravati: A slipper was hurled at TDP chief N Chandrababu Naidu's convoy on Thursday during his visit to Amaravati, where he was to protest against YSRCP government's negligence towards the capital development projects initiated by his government.

The slipper, hurled by someone from the public, hit the side-window of his seat of the bus he was travelling in.

Earlier, some people showed him black flags. Responding to it, Naidu said the protestors were hired by ruling YSR Congress Party.

"I am a former chief minister, the leader of Opposition and chief of a party. Can anyone stage demonstrations like this except the people supported by the YSRCP?" he told ANI.

Naidu is visiting the villages that constitute the Amaravati capital region.

Various development projects have been reportedly stalled in Amaravati after the YSRCP came into power, alleging corruption.

YSRCP has called the capital region development project as a "financial burden" on the state exchequer.

Andhra Pradesh's farmers supporting YSRCP government on Thursday staged a protest and displayed black flags to TDP Chief N Chandrababu while he was on his way to Amaravati to inspect the status of various construction works.

The farmers protested when N Chandrababu Naidu's entourage was on its way to the site of the construction works in Amaravati.

Former Chief Minister Naidu's entourage had to face the protest while it was passing near Venkatapalem, on its way to the site of the construction works in Amaravati.

Earlier in the day, Naidu had attacked the YSRCP government for stalling the development of the Amaravati capital area and said the city is the future of Andhra Pradesh.

In an exclusive chat with ANI, Naidu said he wanted to develop Amaravati on the lines of Hyderabad and to make it the state's financial hub.

"Telangana receives 56 per cent to 70 per cent revenue requirements from Hyderabad which was developed by me. With that experience, I planned Amaravati, a self-financed project. If it is completed, it will generate revenue and employment," Naidu said.

Naidu said that he wanted to develop all cities but the Jagan Mohan Reddy government was "destroying" the state.