The Sena chief spoke to PM Modi over the phone and invited him to the oath-taking ceremony, party sources confirmed. 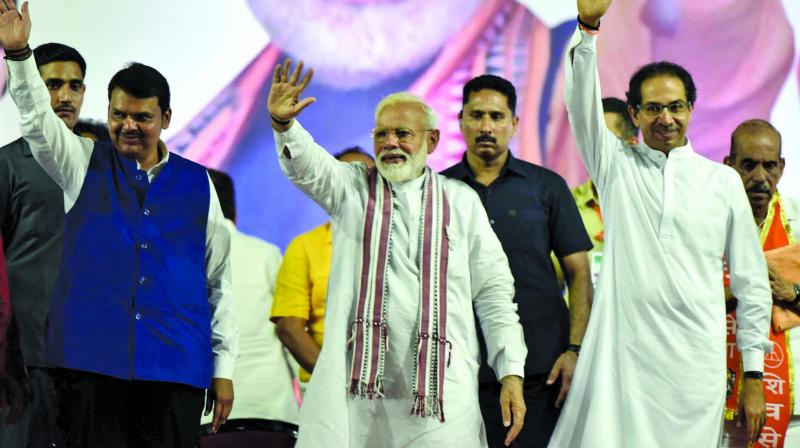 Shiv Sena chief Uddhav Thackeray is all set to take oath as the chief minister of Maharashtra on Thursday, capping off a month-long political drama in the state following the Assembly elections. (Photo: File)

Mumbai: After capping off a month-long political drama in the state following the Assembly elections, Shiv Sena chief Uddhav Thackeray along with six leaders is all set to take oath as the chief minister of Maharashtra on Thursday.

NCP leader Ajit Pawar has said that six leaders, two each from his party, the Shiv Sena and the Congress, will take oath as ministers on Thursday along with Chief Minister-designate Uddhav Thackeray.

Pawar also clarified that he will not take oath as a minister on Thursday evening during the ceremony to be held at Shivaji Park here. "I will not take oath today. Only Chhagan Bhujbal and Jayant Patil will take oath as ministers from the NCP," Ajit Pawar told reporters after a meeting of NCP leaders at party chief Sharad Pawar's residence here.

"Two MLAs each from Shiv Sena and Congress will also take oath as ministers," he added. Ajit Pawar also dismissed reports that he was disappointed over not being sworn-in as the deputy chief minister on Thursday. "I am not at all disappointed. Do you see disappointment on my face?" he asked.

"It was not a revolt. I was in the NCP, I am in the NCP and will remain in the NCP," he said, adding that he would attend the swearing-in ceremony in the evening with his cousin and Lok Sabha member Supriya Sule.

Thackeray will be the first member from his family to occupy the top post and the third from Shiv Sena after Manohar Joshi and Narayan Rane. He will take oath at Shivaji Park at 6:40 pm.

As he takes over the chief minister's post, Thackeray's first priority would be to address farmers' grievances amongst other issues and to keep the flock together, considering that he will head the newly formed Maha Vikas Aghadi, an alliance of Shiv Sena, NCP, and Congress.

Born on July 27, 1960, in Mumbai, Thackeray is the son of late Shiv Sena supremo Bal Thackeray and is a graduate from JJ School of Arts and a published author. He is also a professional photographer whose work has appeared in various magazines and has been showcased at numerous exhibitions.

Thackeray is also the editor-in-chief of 'Saamana', a prominent Marathi newspaper which was founded by his father. He was handed over the responsibility of managing the party during the 2002 Brihanmumbai Municipal Corporation elections, in which Shiv Sena performed well.

The 59-year-old was appointed as the working president of the party in 2003. In 2004, Bal Thackeray announced him as the next party chief.

Having entered politics at a late age, Uddhav has had a short span of time to prove his mettle in his party and the state. Under his capable guidance, his party swept several local and state elections.

The chief minister-designate has also expanded the party base and network across the state including local bodies and zila parishads.

Thackeray organised a successful debt relief campaign for the farmers of Vidarbha region. The farmers in the region were under heavy debt following a long dry spell in 2007.

In the Assembly elections held in October, BJP and Shiv Sena contested the polls together and got 105 and 56 seats, respectively. However, the two parties had a fallout over power-sharing of the chief ministerial post.

Thackeray asserted that the chief minister's post will be on a rotational basis, with BJP ruling the first half of the five-year term and Sena completing the last half. However, the BJP rejected Sena's claim, saying no such agreement was finalised before the elections and made it clear that Fadnavis would be the chief minister for full five years.

Thackeray then severed his party's 30-year-old ties with BJP and entered into talks with Congress and NCP, two ideologically different parties, charting an unlikely alliance.

Later, President's Rule was imposed in the state as no party came forward to form the government even as negotiations between Congress, NCP and Shiv Sena progressed.

It was finally decided that Thackeray would be the chief minister and head the alliance of Maha Vikas Aghadi.

However, in a dramatic turn of events, Fadnavis and NCP leader Ajit Pawar took oath as chief minister and deputy chief minister respectively on November 23, pushing the state into deeper political chaos and nixing Shiv Sena, Congress and NCP's bid to form government in the state. NCP chief Sharad Pawar quickly clarified that his nephew's decision to join hands with BJP was his personal choice and not of the party's.

After days of quick political developments in the state that included a grand public parade by MLAs from Shiv Sena, Congress and NCP, Fadnavis and Pawar tendered their resignations. While Fadnavis said his party did not have the numbers to prove majority on the floor of the Assembly, Pawar stepped down due to personal reasons.

The resignations came after the Supreme Court had asked the Fadnavis government to prove its majority in the 288-member Assembly before 5 pm on Wednesday.

On Tuesday, Thackeray was unanimously elected as the leader of the tri-party alliance which met the Governor B S Koshyari to stake claim to form the government in the state.

The Shiv Sena chief spoke to Prime Minister Narendra Modi over the phone on Wednesday and invited him to the oath-taking ceremony, party sources confirmed.

Thackeray is married to Rashmi Thackeray and has two sons, Aaditya and Tejas.

The 59-year-old's photo book Maharashtra Desha (2010), which is full of breathtaking aerial shots, offers a glimpse into the cultural fabric, physical beauty and historical perspective of Maharashtra.

Around 400 farmers from various districts of Maharashtra have been invited for Thackeray's swearing-in ceremony.