Day after uproar in Parliament, Hedge says Constitution is supreme

Leader of Oppn Ghulam Nabi Azad asked if a minister doesn't believe in Constitution, should he still remain as a minister. 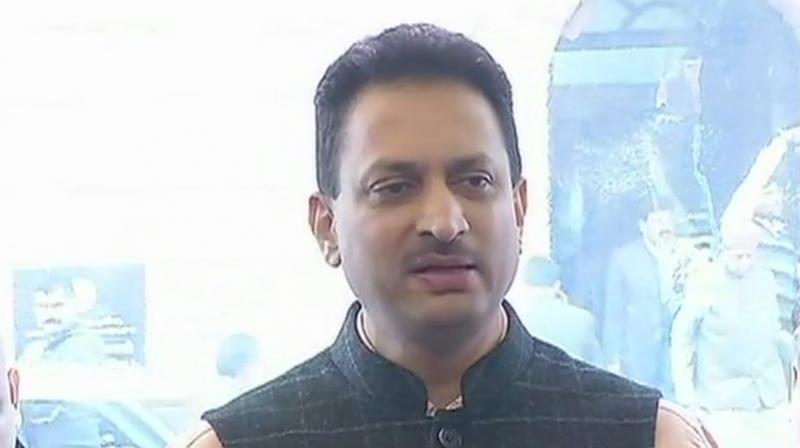 New Delhi: A day after Lok Sabha witnessed several adjournments on Wednesday following the uproar in the House by Opposition, Union minister Ananth Kumar Hegde on Thursday extended his apology and said “Constitution is supreme to me.”

Speaking at the Lok Sabha at the start of the session on Thursday, Ananth Kumar Hegde said, “I deeply respect the Constitution, the Parliament and Baba Saheb Ambedkar. The Constitution is supreme to me, there can be no question about it, as a citizen I can never go against it.”

Minister of State (MoS) for Skill Development and Entrepreneurship said, “Regarding the deadlock in Lok Sabha and Rajya Sabha due to my statement, I want to assure my friends that constitution is supreme to me, Parliament is supreme to me.”

On Wednesday, Rajya Sabha and Lok Sabha witnessed pandemonium. Opposition members in the Upper House on Wednesday shouted "shame, shame" when Hegde, rose to lay the papers listed against his name.

Leader of the Opposition (LoP) and senior Congress leader Ghulam Nabi Azad sought a clarification from the Minister as he could leave the House soon after laying papers.

True to this, Hegde sat in the House for a while listening to opposition protests against his controversial statement that the BJP would change the Constitution by excluding Secularism from the preamble. Soon thereafter, he left the House.

Azad asked if a minister does not believe in the Constitution, does he have the right to remain as a minister.

Sukhendu Sekhar Roy (Trinamool Congress) said secularism is inscribed in the preamble of the Constitution and asked if a minister is allowed to denounce the same preamble in public.

Naresh Agarwal (SP) said the Constitution is the Ramayana and Gita of democracy and any minister who abuses it and its founder Baba Saheb Ambedkar should be removed.

At this, Rajya Sabha chairperson and vice-president of India Venkaiah Naidu interjected to ask members not to bring Babasaheb Ambedkar into the controversy. But the opposition members remained undeterred and trooped into the well raising slogans.

Naidu asked members not to raise slogans and ordered that nothing they were saying would go on record. He then allowed Minister of State (MoS) for Social Justice and Empowerment and founder of the Republican Party of India Ramdas Athawale to speak.

Athawale praised the Prime Minister for honouring the memory of Ambedkar with a fitting memorial and said it was Congress which had insulted Ambedkar.

"Don't create a ruckus. You are going to be defeated in general elections in 2019 and 2024," Athawale told the opposition.

BJP leader Subramanian Swamy claimed Ambedkar did not include the word secularism in the Constitution.

Naidu tried to restore order but all his efforts went in vain. "How much should I tolerate. This is not acceptable. This is not done," he said as slogans were being shouted continuously.

As opposition members continued their noisy protest and demanded a discussion on the issue, Naidu said no discussion can take place without a proper notice.

Ananth Kumar Hegde earlier this week stoked a controversy, saying those who consider themselves secular and intellectual do not have “their own identity” and they are also unaware of their parentage.

“I feel happy about he who knows his blood, but I don’t know what to call those who claim themselves secular,” the minister for skill development and entrepreneurship said at an event.

“Those who, without knowing about their parental blood, call themselves secular, they don’t have their own identity…They don’t know about their parentage, but they are intellectuals,” he said at an event organised by the Brahman Yuva Parishad in Kukanur town in Koppal district.

Urging people to identify with their religion or caste, Hegde said, “I will bow to you, you are aware of your blood. But if you claim to be secular, there arises a doubt about who you are.”

He said he respects the Constitution but “it will be changed in the days to come”. “We are here for that and that is why we have come.”