The Law Minister informed the House that at least 100 triple talaq cases have come to light after the SC banned it in August 2017. 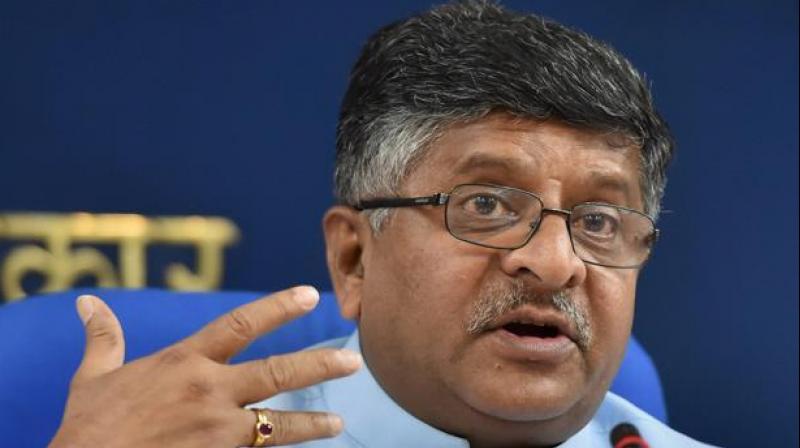 Law Minister said that the main question before the house is that when Islamic countries have regulated provisions of triple talaq then can India, which is a secular nation, remain silent on the issue. (Photo: PTI)

He made this statement while participating in the debate on The Muslim Women (Protection of Rights on Marriage) Bill 2017, which he tabled in the lower House on Thursday morning.

"The Triple Talaq Bill should not be seen through the prism of politics and neither should be linked with any religious motive or vote-bank politics. This bill is for the rights of the women of our country," Prasad said.

The Law Minister informed the House that at least 100 triple talaq cases have come to light after the Supreme Court banned it in August this year.

"At least 300 cases of triple talaq have happened in 2017 out of which 100 after the Supreme Court verdict. We must understand the pain of Muslim women. Today morning, I read a news that a woman in Rampur was given talaq by her husband just because she woke up late," Prasad said.

The Supreme Court had ruled that the practice of divorce through triple talaq among Muslims is "void", "illegal" and "unconstitutional".

"Today the question before the Lok Sabha, which is the biggest panchayat in India, is that will it remain silent on injustice in the name of triple talaq when the Supreme Court has termed it illegal?" Prasad said.

The Law Minister said, "The bill we have here says that if you utter triple talaq, you will land up in jail. The man will also have to pay maintenance and the custody of the child will be with the mother. All over the world, maintenance of wife and children is a continuous social obligation of a husband."

He further said that the main question before the house is that when Islamic countries have regulated provisions of triple talaq then can India, which is a secular nation, remain silent on the issue.

Reading out provisions of triple talaq legislations of Bangladesh and Pakistan, Prasad said, "Why can't we as a secular nation do it? This bill doesn't want to interfere in religion, Sharia or pooja but only deals with triple talaq and Talaq-e-Biddat to provide gender justice, gender dignity and gender equality."

The Biju Janata Dal (BJD) concurred with Owaisi over the bill is flawed.

"This bill is flawed, there are many internal contradictions in the Bill," BJD MP Bhartruhari Mahtab said.

The bill draft says, "Any pronouncement of talaq by a person upon his wife, by words, either spoken or written or in electronic form or in any other manner whatsoever, shall be void and illegal".

There is also a provision of imprisonment for a term, which may extend to three years and fine for violators. The draft bill also envisages entitling divorcee Muslim women for maintenance and has a provision for them to have the custody of their minor children. The offences under the purview of this bill will be cognisable and non-bailable.

The bill shall extend to the whole of India except Jammu and Kashmir.