BJP's Amit Shah heaped praises on PM Narendra Modi while referring to surgical strikes and his address in Hindi at the UN General Assembly. 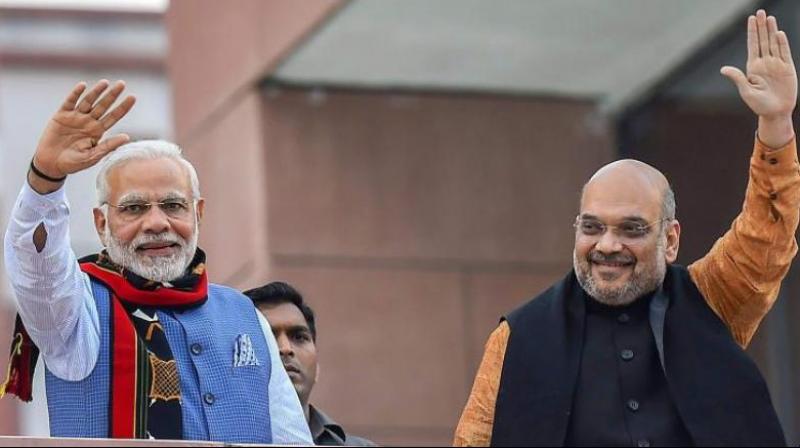 Cuttack: BJP president Amit Shah on Tuesday heaped praises on Prime Minister Narendra Modi while referring to surgical strikes and his address in Hindi at the UN General Assembly.

“Pakistan attacked Uri by sending its terrorists. Within 10 days, Prime Minister Modi took the revenge through surgical strikes. This only he can do. The Congress can’t do this. When Prime Minister Modi speaks in Hindi at the UN General Assembly, every Indian feels proud,” said Shah, while addressing a rally here.

Projecting BJP as the true custodian of marginalised sections of the society, he said: “BJP-led Central government is for the poor, tribal people and Dalits. Congress ruled India for decades but the poor did not get even basic amenities such as gas connections, medical benefits and electricity.”

“After Narendra Modi became the Prime Minister, many houses got LPG connections. We made toilets for eight crore houses and two crore electricity connections were given to the poor people,” said the BJP chief.

“In Odisha, the poor people are unable to benefit from the schemes of Central government due to the narrow mindset of the state government led by Naveen Patnaik. I want to ask the Chief Minister why poor people in the state are not getting the benefit of Ayushman Bharat,” he said.

“The state government is afraid because if they will allow people to benefit from Ayushman Bharat, then Prime Minister Modi will become famous and the BJP’s roots will get stronger. The Panchayat elections show that the next government will be made by BJP in the state,” said Shah.

Talking about how the BJP has been generous in giving funds to Odisha, Shah said: “In 13th Finance Commission, Congress gave around Rs 79,000 crore to the state. When the BJP came to power at the Centre, we gave Rs 2,11,510 crore for development works in Odisha as per the recommendation of 14th Finance Commission.”

“Apart from this, we also gave Rs 51,000 crore more. In total, we have given Rs 5,13,000 crore for Odisha’s development. Has this money reached the villages in Odisha? Do you get electricity for 24 hours in your villages? Do you get drinking water from taps,” he asked.

Talking about the much-hyped grand alliance of opposition parties, BJP chief Shah said: “BJP is all set to contest the coming Lok Sabha election under Prime Minister Modi’s leadership. We have more than 26 parties with us in the NDA. On the other hand, there is a grand alliance, which is fake. All these parties under Congress’ leadership do not have even a leader and a positive agenda for development.”

In a bid to infuse confidence in the BJP workers, he said: “I want the party workers to go home today with the vision of creating a ‘new Odisha’ by taking motivation from Utkal Gourab Madhusudan Das. Also, take the pledge that in the next Vidhan Sabha elections Odisha will get an Odia speaking Chief Minister.”