BJP, Cong still to name candidates on some LS seats in Gujarat

Gujarat has 26 Lok Sabha seats and the ruling party has declared 19 candidates so far. 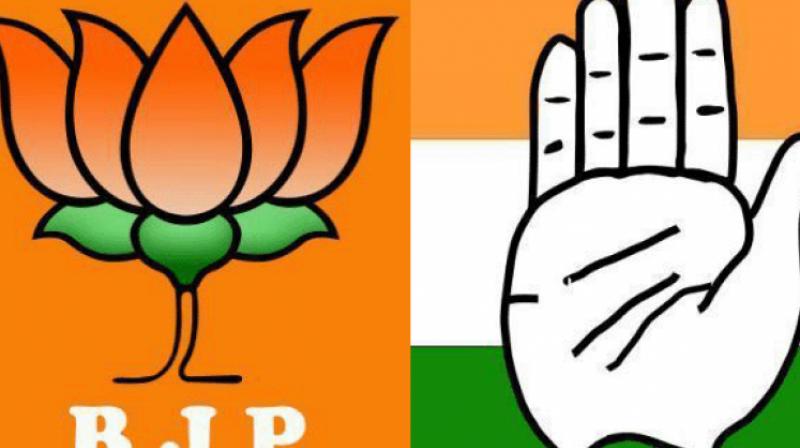 The Congress is yet to declare its candidate on the Gandhinagar seat, where Shah is the BJP candidate. (Photo: file)

Ahmedabad: The BJP and the Congress are still grappling with selection of candidates on some Lok Sabha seats in Gujarat, where the process of filing of nomination papers is underway. Gujarat has 26 Lok Sabha seats and the ruling party has declared 19 candidates so far, while the main opposition Congress has come with out with just 12 nominees.

Friday was the second day of filing of nomination papers by candidates in Gujarat and the process will continue till April 4. The state will vote in a single phase on April 23 It seems both the parties are waiting for the other side to declare candidates on crucial seats when stakes are high in the home state of Prime Minister Narendra Modi and BJP president Amit Shah. On late Thursday night, the Congress declared six more candidates, four of whom are sitting MLAs. However, the name of its young MLA Alpesh Thakor is missing from the list.

The Congress has fielded former MP Jagdish Thakor from Patan. The sixth Congress candidate is an OBC leader. Both the parties have maintained they will declare the names of their remaining candidates soon. "The process is going on and the remaining names will be declared in a short time," Gujarat BJP president Jitu Vaghani told reporters Friday. Gujarat Congress president Amit Chavda and Leader of Opposition in the assembly Paresh Dhanani are camping in Delhi to finalise the names on the remaining seats. State Congress spokesperson Manish Doshi said, "The process is going on and the names will be announced soon."

The Congress is yet to declare its candidate on the Gandhinagar seat, where Shah is the BJP candidate. The Congress is still searching for a "strong" candidate to take on Shah, party sources said. Patidar quota leader Hardik Patel's plan to contest the Lok Sabha elections on a Congress ticket was thrown into disarray after the Gujarat High Court Friday declined to stay his conviction in a rioting case.

The 25-year-old Patidar leader, who recently joined the Congress, has been sentenced to two years in jail in the 2015 case, which is related to the quota agitation. Absence of a stay on his conviction will make him ineligible to contest polls. Patel was widely expected to contest from Jamnagar, though a section in the Congress wanted him to fight against Shah in Gandhinagar. The BJP is yet to declare candidates for Mehasana and Patan seats.

Alpesh Thakor, a prominent OBC leader, had earlier expressed his desire to contest from Patan, but the Congress has given ticket from the seat to Jagdish Thakor, who had lost to BJP candidate Liladhar Vaghela in 2014. The Congress has declared candidates for Junagadh, Rajkot, Porbandar and Valsad seats. In Junagadh, the Congress has fielded its Una MLA Punja Vansh, while in Rajkot it has nominated Lalit Kagathara, the MLA from Tankara. The Porbandar seat has gone to Congress MLA from Dhoraji Lalit Vasoya, while in Valsad, the party MLA from Kaparada, Jitu Chaudhary, is in the fray. The Congress has fielded its veteran leader V K Khant from Panchmahal. The ruling BJP had won all the 26 seats in 2014.