PM Modi hugs world leaders, but not his own people: Priyanka Gandhi in Ayodhya

Before visiting Ayodhya, Priyanka has already paid visits to Rae Bareilly and Amethi for electioneering. 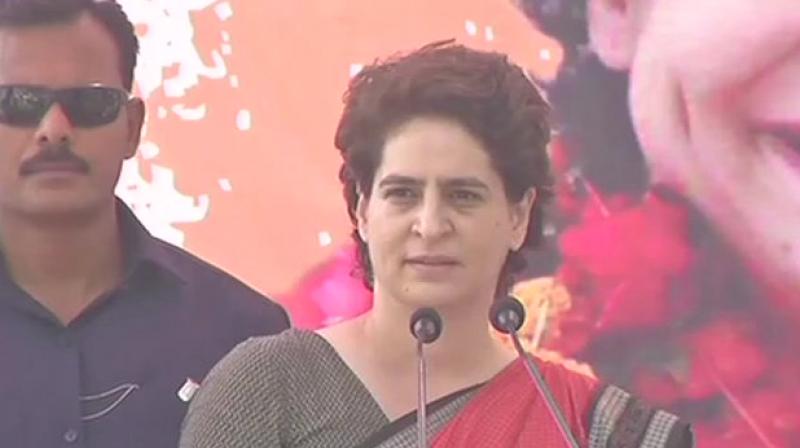 Priyanka remarked that the BJP was making only "tall claims". (Image: ANI)

Ayodhya: Congress general secretary for Uttar Pradesh East Priyanka Gandhi Vadra on Friday took a swipe at Prime Minister Narendra Modi, saying he travelled across the world and hugged everyone, but did not reciprocate the same with the people in India.

She said that she was surprised to know that Prime Minister Modi did not visit the villages in his Varanasi Lok Sabha constituency, despite being popular due to his publicity stunts.

"I asked the people if the Prime Minister visits villages in Varanasi, I got a reply that 'he does not visit'. I was surprised because his popularity through publicity is such that I thought he must have been doing something for the people in the constituency," she added.

Accusing the BJP of being the 'chowkidar' (watchman) for the rich, and not for the poor, Priyanka termed the BJP government as "anti-farmer and anti-people", and is only focused on making the rich richer.

"This government works for the industrialists only. They waived off their loans. BJP government is anti-farmer and anti-people. Our farmers are drowning in debt. But, they do not have anything for the poor. So, the party which won a huge majority, it has betrayed you now," she said.

Claiming that the BJP leaders did not visit villages in India in fear of "facing the truth", the Congress leader said, "In a democracy, you need to listen to the people. But, they do not want to listen to your voice. They are scared that they will have to face the truth. You cannot hide or suppress the truth. The government wants to curb your voice."

Chastising the ruling party for its 'failure' to fulfil promises made during last poll campaigning such as Rs 15 lakh in every person's bank account and two crore jobs, Priyanka remarked that the BJP was making only "tall claims".

Accusing the BJP of blocking payments to beneficiaries under the Congress' MNREGA scheme, Priyanka continued, "Congress gave you MNREGA that guarantees you 100 days of employment. But when this government came, they made sure that those working under this scheme are not paid. People have not been paid in the last six months. They are deliberately doing this because they want to close this programme."

Continuing her tirade against the BJP, the Congress general secretary alleged that institutions and democratic structure of the country have been under constant attack in the last five years.

"In a democracy, people are the most powerful. But this government does not want to make you strong, they want to make themselves strong," Priyanka alleged.

Underlining that vote is a weapon for the people in a democracy, Priyanka told the electorate that they should make a wise decision before exercising their franchise.

"This is your country and does not belong to anyone. Farmers and jawans have made this country. You need to decide to elect a government who is committed to development, listen to your voice," she said.

Before visiting Ayodhya, Priyanka has already paid visits to Rae Bareilly and Amethi for electioneering.

Uttar Pradesh will go to polls in seven phases, from April 11 to May 19. Counting of votes will take place on May 23.