40 TMC MLAs in touch with me, will cross over after I win polls: Modi

Modi also attacked the TMC chief 'for not allowing the people of West Bengal to go and caste their vote'. 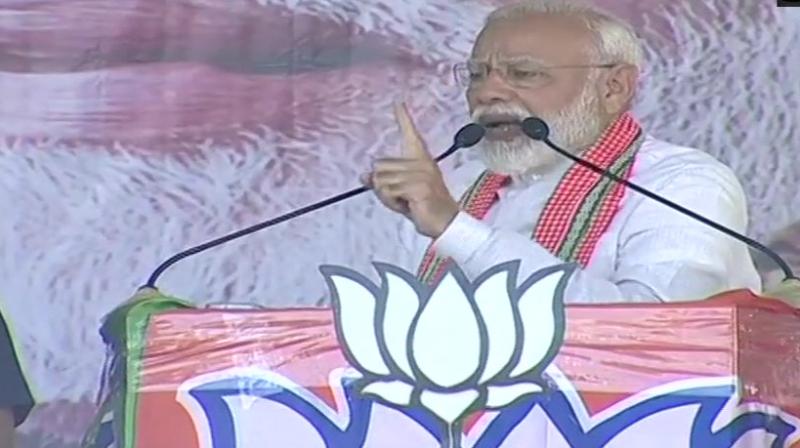 Sreerampur: Addressing a rally here on Monday Prime Minister Narendra Modi lashed out at the state Chief Minister Mamata Banerjee and said that the TMC lawmakers expressed disgrace towards the party.

"Forty TMC MLAs are in touch with me, all its lawmakers will desert the party once BJP wins polls," said Modi in a rally at West Bengal.

Modi also attacked the TMC chief for 'not allowing the people of West Bengal to go and caste their vote'. He said, "TMC goons are preventing people from casting votes."

Speaking about the accusations by the Oppositions, Modi said, "Earlier only Modi was abused, now even EVMs are. Opposition's campaign revolves around abusing Modi. If you remove these abuses, nothing will be left."

Mocking Banerjee for often losing her cool as she was "sensing defeat", Modi said she cannot even dream of becoming the prime minister.

"With just a handful of seats, 'Didi' you can't reach Delhi. Delhi is far away. Going to Delhi is just an excuse. Her real intention is to politically establish her nephew," he said. Banerjee's nephew Abhishek is a sitting MP from Diamond Harbour and the TMC candidate for the seat.

Violence marred the first few hours of polling in West Bengal, where the fourth phase of elections is underway in eight Lok Sabha constituencies.

According to a senior election official, clashes broke out between the supporters of rival parties in Nanoor, Rampurhat, Nalhati and Siuri areas of Birbhum seat, injuring several people on the two sides.

According to reports, Supriyo had a tiff with polling officials inside a booth, following which TMC supporters attacked his vehicle.

A total of 1,34,56,491 electorate is set to decide the fate of 68 candidates Monday in the eight constituencies -- Baharampur, Krishnanagar, Ranaghat (SC), Burdwan East (SC), Burdwan-Durgapur, Asansol, Bolpur (SC) and Birbhum.

The EC has deployed 580 companies of central forces to man over 98 per cent of the polling booths in these constituencies to ensure free and fair polling.

The counting of votes will be done on May 23.