The villagers boycotted polls at two booths in Jemua after protesting against absence of central forces leading to suspension of polling. 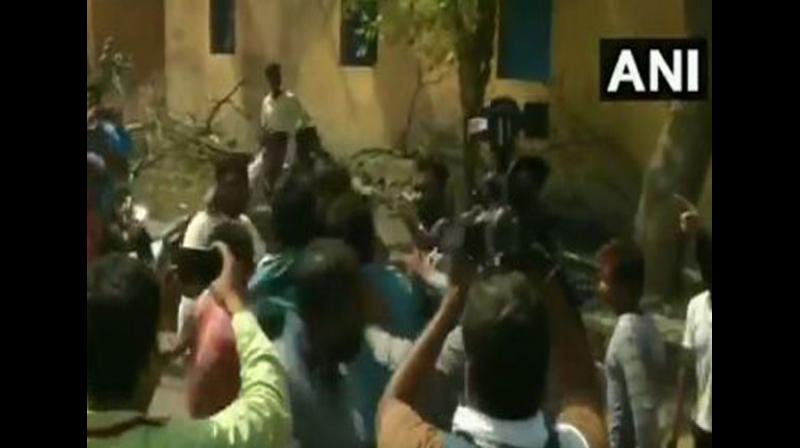 There were reports of altercations between supporters of TMC, BJP and CPI (M) from several polling booths in the constituency. (Photo: ANI)

Asansol: Security forces resorted to lathi-charge on Monday at a polling station in Asansol parliamentary constituency after clashes erupted between TMC and BJP supporters over allegations of electoral malpractices.

A BJP delegation which will include Mukhtar Abbas Naqvi, Vijay Goel and Anil Baluni, is scheduled to meet the Election Commission of India (ECI) in Delhi today over the issue of poll-related violence in West Bengal.

#WATCH Clash between TMC workers and QRF and security personnel outside polling booth number 125-129 in Asansol, after disagreement erupted between BJP & CPI(M) workers after TMC workers insisted on polling despite absence of central forces. #WestBengal pic.twitter.com/wmTE97gY4i

Union Minister and BJP candidate from Asansol, Babul Supriyo, had an altercation with polling officers and TMC cadres at a booth, alleging that supporters of Mamata Banerjee-led party were capturing polling stations and not letting voters to cast their ballot.

Supriyo's car which was parked outside the polling station, was damaged in the melee.

"I will myself take the central forces to that polling station. It is very good that people in West Bengal are aware and they want central forces so that they can cast their vote without any hindrance. This is why Mamata Banerjee is scared," Supriyo told reporters.

The villagers boycotted polls at two booths in Jemua after protesting against absence of central forces leading to suspension of polling.

Supriyo is pitted against Trinamool Congress’ Moon Moon Sen from the Asansol seat.