India   Politics  29 Apr 2019  Rahul replies to contempt notice issued to him by the SC
India, Politics

Rahul replies to contempt notice issued to him by the SC

The counsel mentioned the matter before a bench headed by Chief Justice Ranjan Gogoi and said they be allowed to file a reply. 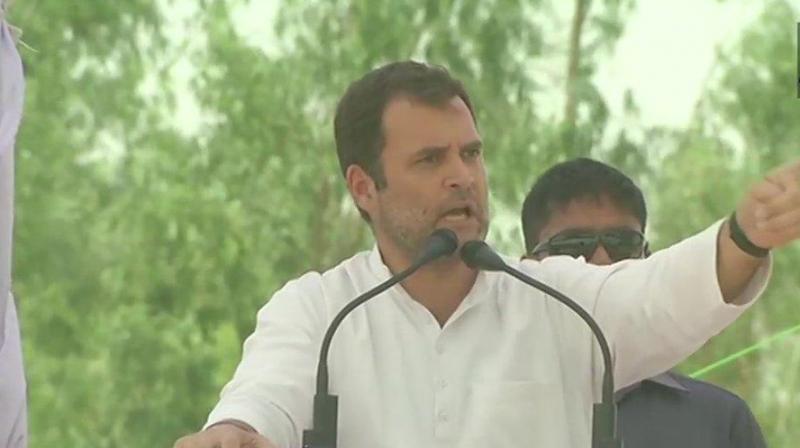 The apex court had issued criminal contempt notice to Gandhi for his "chowkidar chor hai" remark on Modi, which the apex court said was "incorrectly attributed" to it. (Photo: File)

New Delhi: Congress President Rahul Gandhi on Monday filed his reply in the Supreme Court on a notice issued to him after a contempt case by BJP MP Meenakshi Lekhi for his remarks on the Rafale verdict.

The Congress President also sought dismissal of the contempt petition filed by BJP leader Meenakshi Lekhi, saying it was an abuse of the process of the court. In his counter affidavit, Gandhi expressed regret for the "chowkidar chor hai" remark on Prime Minister Narendra Modi while referring to the Rafale judgment.

"It is also clear that no court would ever do that and hence the unfortunate references (for which I express regret) to the court order and to the political slogan in juxtaposition the same breath in the heat of political campaigning was ought not to be construed as suggesting that the court had given any finding or conclusion on that issue," he said in his affidavit.

The apex court had on April 23 issued notice to Gandhi on a criminal contempt petition filed against him by Lekhi for his remarks. In his affidavit, Gandhi said he did not have the slightest or remotest intention to bring the court into political arena, or bring it into disrepute by attributing something which the court had not said.

Gandhi said, "Several limbs of the government and of the ruling party" have repeatedly stated that the December 14 last year's order of the apex court constitute a clean chit to the government.

"The answering respondent (Gandhi) would also submit that his statement on April 10, 2019, had also been made in that context, purely politically, to counter the aforesaid misinformation campaign being led by senior functionaries of the BJP as well as the government that the judgement of this court dated December 14, 2018, was a clean chit to the government regarding all the aspect of the Rafale deal," he said.

"It is also noteworthy that the Rafale issue which had been and continues to be one of the most prominent political and social issues in this country for many months and despite the matter being sub judice it has been the subject of incessant discussion in civil society and the media," he said.

The counsel appearing for Gandhi mentioned the matter before a bench headed by Chief Justice Ranjan Gogoi and said they be allowed to file a reply on the contempt notice.

The bench, also comprising Justices Deepak Gupta and Sanjiv Khanna, allowed advocate Sunil Fernandes, who was appearing for Gandhi, to file the counter affidavit. The apex court had earlier said it will hear the criminal contempt petition on April 30.