Before filing the nomination, Deol paid a visit to the Golden Temple in Amritsar and offered prayers. 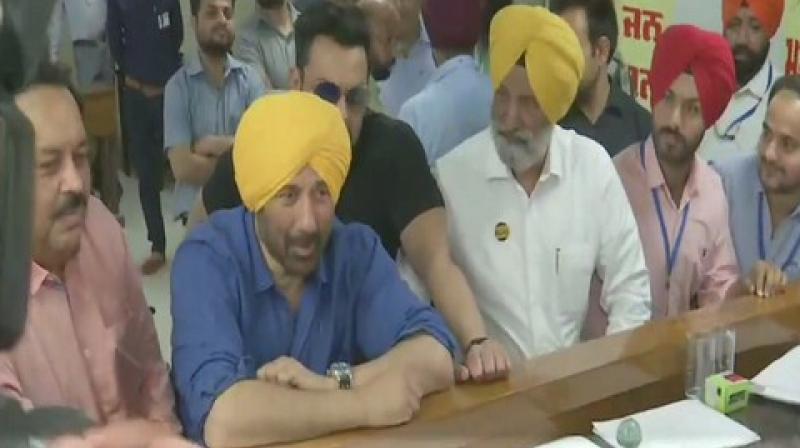 Deol was inducted into the party on April 23 in New Delhi in the presence of Union ministers Nirmala Sitharaman and Piyush Goyal. (Photo: ANI)

Gurdaspur: Actor-turned-politician Sunny Deol, who was recently inducted into the Bharatiya Janata Party, filed his nomination from the Gurdaspur Parliamentary Constituency on Monday.

Before filing the nomination, Deol paid a visit to the Golden Temple in Amritsar and offered prayers.

After he filed his nomination papers, his father Dharmendra Deol took to the micro-blogging site and tweeted in his support: “We are asking for your support. If you support us, the victory will be yours. The victory will be of my brother and sisters of Punjab and the beautiful Gurdaspur."

Earlier in 2004, Dharmendra had also represented BJP from Bikaner Lok Sabha constituency and won the seat.

Dharmendra’s wife Hema Malini is a member of the BJP and sitting MP from Mathura.

Deol was inducted into the party on April 23 in New Delhi in the presence of Union ministers Nirmala Sitharaman and Piyush Goyal.

After joining the party, Deol had said that he was looking forward to working with Prime Minister Narendra Modi. "My work will do the talking," he had asserted.

PM Modi also met Deol on Sunday and posted a photo of the meeting along with a message on Twitter stating that he was impressed with Deol’s passion for a better India.

“What struck me about Sunny Deol is his humility and deep passion for a better India. Happy to have met him today. We are all rooting for his victory in Gurdaspur!” “We both agree - Hindustan zindabad tha, hai aur rahega,” the Prime Minister said in a tweet.

Gurdaspur parliamentary constituency was earlier represented by actor Vinod Khanna who had won from here four times - 1998, 1999, 2004 and 2014 - on a BJP ticket.

“Sunny Deol is a ‘filmi fauji,’ while I am a ‘real fauji.’ Captain Amarinder Singh had said in Gurdaspur on Friday.

The actor held his first roadshow in Rajasthan’s Barmer on Saturday.

Elections in Punjab will be held on May 19 in the last phase for all 13 seats. The counting of votes will begin on May 23.