UP has changed, bahubalis have no impact now: Amit Shah

'Rahul Gandhi is the mahamilavati leader of the mahagatbandhan,' Amit Shah said. 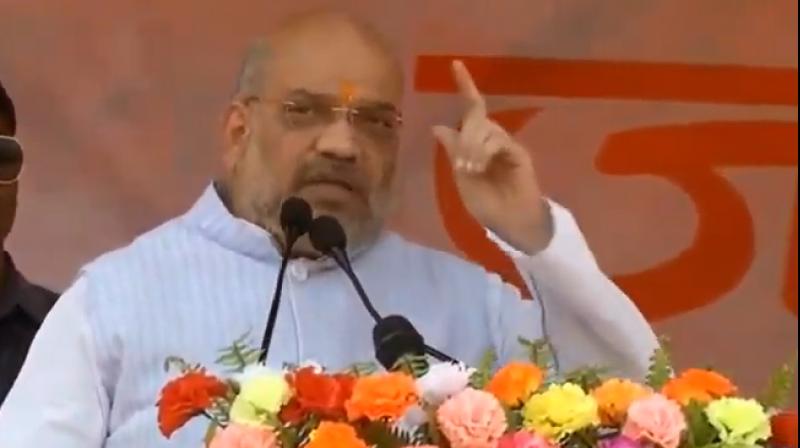 Shah also took a swipe at Rahul Gandhi, saying if temperatures increase in the country, the Congress President goes abroad and even his mother cannot find him. (Photo: Twitter/ @bjp4india)

Chitrakoot: BJP President Amit Shah Monday accused the opposition alliance of giving tickets to "bahubalis" (muslcemen) in Uttar Pradesh but said their presence would have no impact now as the Yogi Adityanath government hangs them upside down.

Shah also took a swipe at Rahul Gandhi, saying if temperatures increase in the country, the Congress President goes abroad and even his mother cannot find him.

Addressing a Vijay Sankalp rally here, he said, "Mahamilavat wale logon ne Uttar Pradesh mein bahubalion ko ticket diya hai lekin ab yaha bahubalion ki nahi chalti". BJP leaders have been referring to the opposition alliance as "mahamilavat". "The mahamilavtis are yet not able to understand that Uttar Pradesh has changed ...they have given tickets to bahubalis ...now it is Yogi government which is at the helm," Shah said. "Ab yahan bahubalion ki nahi chalti...ab bahubalion ko ulta latka kar seedha kar diya jata hai,"(now musclemen have no impact and government acts tough with them), he said.

Referring to chants of 'Modi-Modi' at election meetings, he said "it is not a mere slogan but blessings of countrymen...all people in the country want Modiji to become the prime minister again."

Attacking the Congress president, he said "Rahul Gandhi is the mahamilavati leader of the mahagatbandhan...if temperatures in country turn high he takes leave and goes out of country...even his mother is not able to find him."