The injured were taken to a hospital in Ranchi, adding four of them suffered minor injuries. 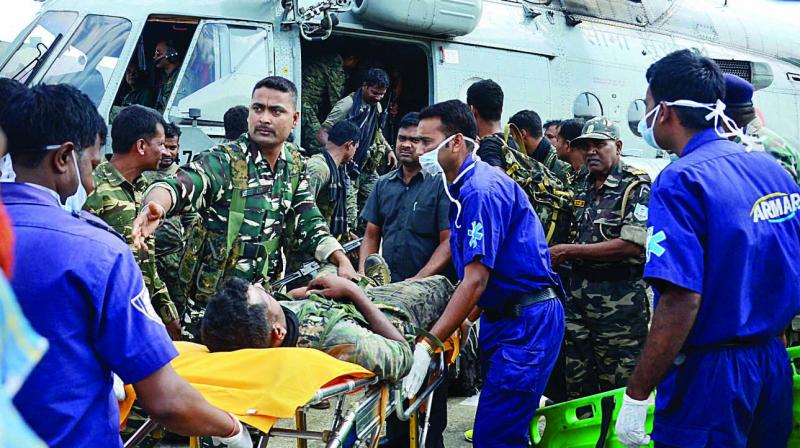 CRPF personnel injured in an IED blast triggered by Naxals in Seraikela-Kharsawan district are airlifted for treatment in Ranchi on Tuesday. (Photo: PTI)

Ranchi: Fifteen security personnel were injured when Maoists triggered a series of IED blasts near Hurda forests in Jharkhand’s Seraikela-Kharsawan district in the early hours of Tuesday, a police officer said.

The blasts took place around 5 am when a joint team of the CRPF’s special jungle warfare unit, CoBRA, and police was carrying out anti-Naxal operations in the forests of Kuchai area in the district, he said.

“Fifteen security men were injured when the Maoists triggered more than 15 IED blasts. Two of the injured are in a serious condition,” inspector general of police (Operation) Ashish Batra said.

The injured troops, 13 belonging to the CRPF’s CoBRA battalion and the rest to the Jharkhand Armed Police and the district police, were airlifted to Ranchi, another senior officer said. Superintendent of police of Seraikela-Kharsawan, Chandan Kumar Sinha, said  the Maoists team, headed by Maharaj Pramanik, was involved in the IED blasts.

He said that after the IED blasts a gun fight took place with some Naxalites being shot at, but they managed to flee into the dense forest.

The injured were taken to a hospital in Ranchi, adding four of them suffered minor injuries.

Seraikela Sub-Divisional Police Officer (SDPO) Avinash Kumar said all the injured were out of danger.