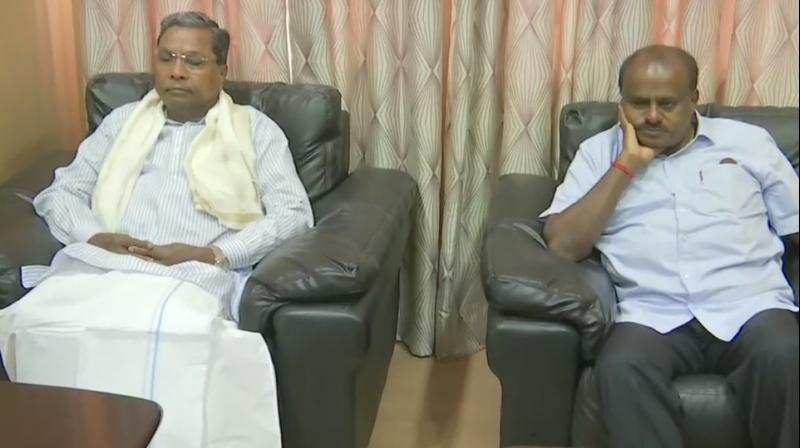 The meeting holds importance amid the speculation of falling of the coalition government of Congress and JD(S) in the state. (Photo: ANI twitter)

Bengaluru: A meeting is underway between Chief Minister HD Kumaraswamy and other senior leaders of Congress including Deputy Chief Minister Dr G Parmeswara, Congress Legislature Party (CLP) leader Siddaramaiah among others ahead of the cabinet reshuffle.

The scheduled meeting of the Congress Legislature Party will be held at 6:30 pm on Wednesday.

On Tuesday, Kumaraswamy met with Dinesh Gundu Rao and Siddaramaiah to discuss and strategise the ruling Congress-JD(S) government's political development after the landslide victory of BJP in the concluded Lok Sabha polls.

The meeting holds importance amid the speculation of falling of the coalition government of Congress and JD(S) in the state.

On Monday, Congress leader KN Rajanna claimed that the coalition government of JD(S) and Congress will collapse after June 10.

The BJP won 25 of the 28 seats along with an Independent backed by it, leaving one seat each to Congress and JD(S).

The BJP is the single largest party with 105 members in the 225 member assembly while the ruling coalition has 117 members with 79 legislators from Congress, 37 from JD(S) and 1 from BSP.