The case was transferred to Bhopal's Special Court and he was sent to jail till July 7. 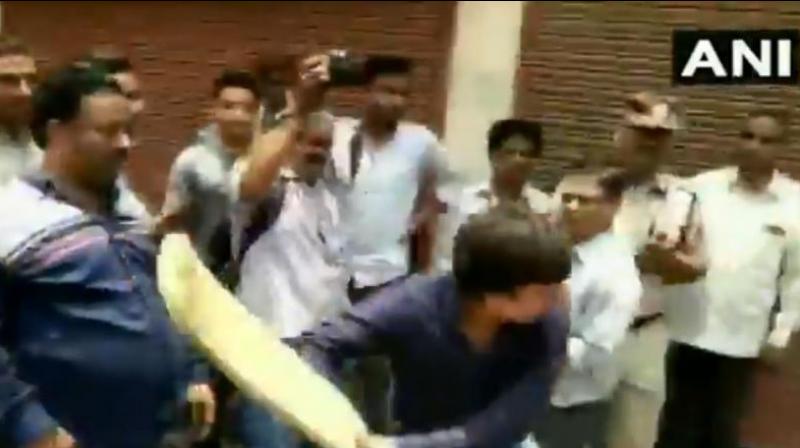 BJP MLA Akash Vijayvargiya was caught on camera thrashing a Municipal Corporation Officer who was in the area for an anti-encroachment drive. (Photo: ANI)

Indore: Akash Vijayvargiya, son of senior BJP leader from Madhya Pradesh Kailash Vijayvargiya, who was arrested on Wednesday for hitting a municipal official with a cricket bat, Saturday got bail from a special court in Bhopal.

Additional Sessions Judge Suresh Singh -- special judge for cases against MPs and MLAs -- granted bail to Akash, who was sent to jail till July 7.

BJP MLA Akash Vijayvargiya was caught on camera thrashing a Municipal Corporation Officer who was in the area for an anti-encroachment drive, with a cricket bat mercilessly and slapped three times before the police stopped the legislator.

A few bystanders also held the officer by his collar and slapped him repeatedly while an unidentified man attempted to rip the officer's shirt apart.

#WATCH Madhya Pradesh: Akash Vijayvargiya, BJP MLA and son of senior BJP leader Kailash Vijayvargiya, thrashes a Municipal Corporation officer with a cricket bat, in Indore. The officers were in the area for an anti-encroachment drive. pic.twitter.com/AG4MfP6xu0

Talking to media after the incident, Akash said, " This is just the beginning, we will end this corruption and goondaism. 'Aavedan, nivedan aur fir dana dan' this is our line of action."